Boeing Hopes For Year Of The Max At Air Show

For Chicago-based Boeing, this year's show offers a chance for its revamped 737, called the 737 Max, to close a gap with a rival jet. 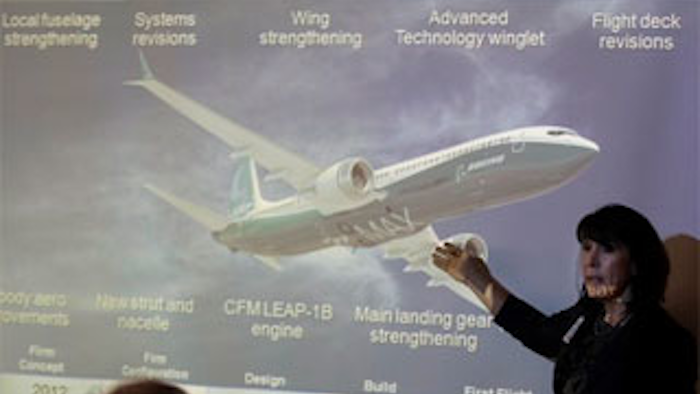 MINNEAPOLIS (AP) — A big air show is all about bragging rights. It's where airplane makers announce large jet orders, dazzle customers with aerial displays and show off their latest technology.

But a debt crisis in Europe could make the industry more subdued when it gathers at the Farnborough International Airshow near London this week. It's a huge event in the aerospace world, attracting 1,400 exhibitors and aerospace heavyweights such as Boeing, Airbus, Embraer, Bombardier and ATR.

Air travel tracks economic growth, and there isn't much of that right now in Europe, one of the world's largest aircraft markets. Europe's crisis could crimp aircraft sales for Airbus and Boeing, the world's two largest airplane manufacturers. Longer term, there is still plenty of demand from growing airlines in China, India and the rest of the developing world.

Barclays analyst Joseph Campbell expects total orders to fall this year, but not because of the economy. He thinks they'll fall because Boeing and Airbus have a combined backlog of 8,312 planes, and they make roughly 1,000 a year.

Their backlogs are so big, "and the first available slots so far away, that there's not much left to sell" other than Boeing's 737 Max, he says.

For Chicago-based Boeing, this year's show offers a chance for its revamped 737, called the 737 Max, to close a gap with a rival jet. The Max has a more fuel-efficient engine than its predecessor and will compete with Airbus' A320neo, another top-selling plane in the same size range that is getting a new engine. Higher fuel prices mean airlines are willing to pay for more fuel efficiency.

Airbus got a jump on Boeing, offering the neo much earlier. It's already got 1,325 orders from 25 customers. Boeing has orders for 451 Maxes and commitments for more of the planes, which have a list price between $78 million and $102 million.

"This is a year that they need to play catch-up," says Richard Aboulafia, an aerospace analyst for the Teal Group.

Boeing heads to the event with a new chief of commercial aircraft, Ray Conner. Until late June, Conner ran Boeing's sales efforts, so he'll be right at home in Farnborough pitching the Max to potential customers.

Toulouse, France-based Airbus, meanwhile, announced last week that it would build its first airplane factory in the United States. The plant will produce the A320 in Mobile, Ala., starting in 2015, aiming to better compete against Boeing.