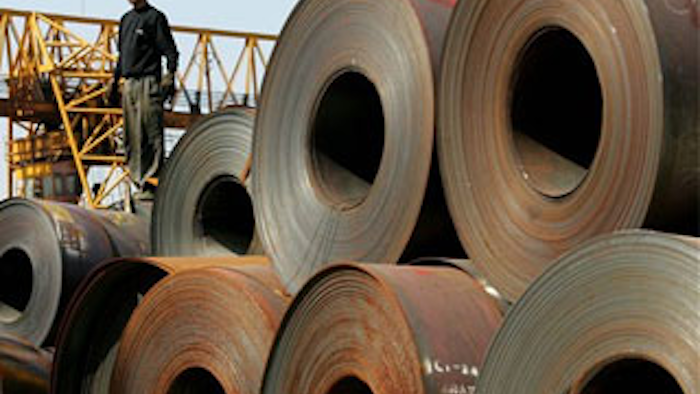 Second only to Luxemburg's ArcelorMittal SA with a steel production of 46.1 million tons a year, the merged companies together have more than 81,000 employees and posted annual sales of around 5.5 trillion yen in the fiscal year ended in March.

The launch of the new company is the first major alliance in the Japanese steel industry after the merger in 2002 of Kawasaki Steel Corp. and NKK Corp., which created JFE Holdings Inc.

But globally, the company is expected to continue facing fierce competition from major Chinese and South Korean steelmakers who have been expanding their market share in Asia through aggressive production increase and low prices.

South Korean steelmaker Posco, the fourth largest steel producer in the world, has been winning shares of automotive steel sheeting for Japanese makers, while Chinese steelmaker Baoshan Iron & Steel Co., the third largest, has been expanding operations on the back of cheaper labor.

Shoji Muneoka, who became the chairman of Nippon Steel & Sumitomo Metal, said, "Steel is still a growing industry" worldwide, and the company plans to raise its output to 60 million to 70 million tons a year.

"We aim at becoming No. 1 in the world in terms of quality and scale," he said.

The outlook, however, is not rosy, as steel prices have fallen globally on weakening demand since robust production increases started in China around 2005, while prices of raw materials have remained high, as resources giants maintain their strong negotiating power and steel consumption keeps growing in emerging markets.

Sumitomo Metal and Nippon Steel said in August they would book a combined 240 billion yen in special losses, as some of their steel plants have not been able to meet expected business performance.

Earnings recovery "depends on how efficient we can make this company by eliminating waste," said Hiroshi Tomono, who assumed the presidency of the new company.