General Motors Co.'s Opel unit said Monday that it plans to end car production at one plant in Germany in 2016, but a slimmed-down factory may continue to make components. Employees at the Bochum plant in northwestern Germany, one of four in the country, were told that vehicle production will end when the company stops making the current Zafira model. 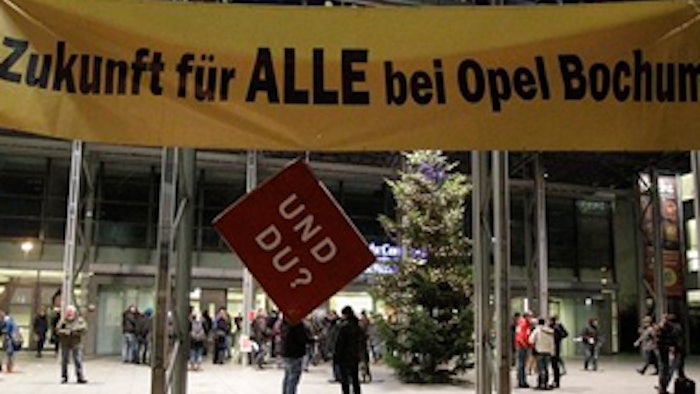 BERLIN (AP) — General Motors Co.'s Opel unit said Monday that it plans to end car production at one plant in Germany in 2016, but a slimmed-down factory may continue to make components.

Employees at the Bochum plant in northwestern Germany, one of four in the country, were told that vehicle production will end when the company stops making the current Zafira model. That was widely expected after the company announced a turnaround plan in June, and "despite intensive efforts this situation could not be changed," Opel said.

Opel, like several other mass-market car manufacturers on the continent, has been struggling amid economic gloom in Europe and overcapacity in the auto industry. The turnaround plan envisions cost cuts, new models and efforts to win new export sales.

The Adam Opel GmbH unit is based in Germany, where the automaker has more than 20,000 employees — a bit more than half the total European workforce of Opel and sister brand Vauxhall. About 3,000 people work at the Bochum plant, and it wasn't clear how many jobs might remain after car production ends.

GM's warehouse in Bochum will continue operating after 2016 and may be expanded, Opel said. It also is negotiating with employee representatives to move component production to the site.

Opel "will implement still-necessary job reductions in the most socially responsible way," Steve Girsky, chairman of Opel's board of directors and vice chairman of GM, said in a statement. He added that the company hoped to avoid forced layoffs.

Opel's future has long been politically sensitive in Germany. In 2009, GM scrapped a plan — favored by Berlin — to sell a majority stake to a consortium led by Canadian auto parts maker Magna International Inc. and decided to restructure the brands itself instead.

"The workforce's anger is understandable because there have been some decisions by GM in the past that certainly weren't helpful. For example, the lack of access to certain markets but also the treatment of employees, which has been anything but exemplary," Economy Ministry spokesman Holger Schlienkamp said.

Still, both officials made clear the government doesn't plan to intervene.

Employee representatives said they still hoped to get the decision reversed.

"We have at least four years to make clear that we want to continue building cars in the following years," said Rainer Einenkel, the head of the factory's employee council.