Back in 2007, Toyota trumpeted its bulked-up Tundra as a game-changer that would cut into Detroit's dominance of the U.S. pickup truck market. "The truck that's changing it all," was the tagline from an ad that featured the beefy Tundra pulling a 10,000-pound trailer up a steep ramp. 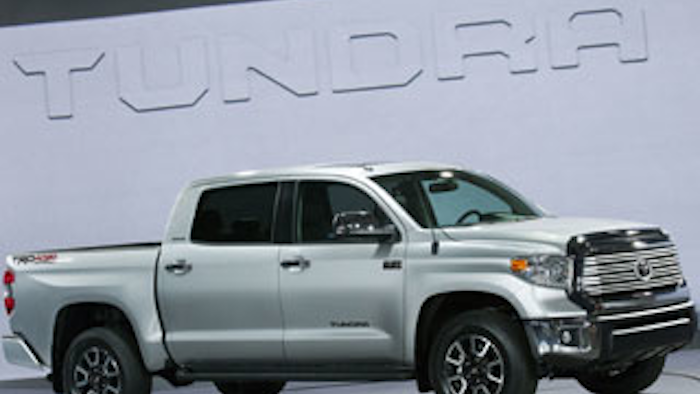 DETROIT (AP) — Back in 2007, Toyota trumpeted its bulked-up Tundra as a game-changer that would cut into Detroit's dominance of the U.S. pickup truck market.

"The truck that's changing it all," was the tagline from an ad that featured the beefy Tundra pulling a 10,000-pound trailer up a steep ramp.

But after six years on the market, the Tundra hasn't changed much of anything. Instead, Toyota learned that unlike car buyers, American pickup owners are still fiercely loyal to their Fords, Rams and Chevrolets. And that Detroit feverishly guards its lead in the high-margin truck business.

Toyota is rolling out the 2014 Tundra on Thursday at the Chicago Auto Show, minus lofty sales goals or talk of breaking into Detroit's cash box. The new version goes on sale in September. The price and gas mileage haven't been announced.

Longtime Detroit buyers agree. Jon Carey, who co-owns a drywall business near Ann Arbor, Michigan, hauls tools and building materials with two Ram pickups purchased in 2006, and he sees no reason to switch.

"If you're just talking apples-to-apples, in my opinion, they'll never break into it," Carey said of Toyota. "If they were giving the same price point, I don't know that I would necessarily switch. There would have to be some real reason behind it."

The 2014 Tundra has a tougher squared-off look with a bold grille and more aerodynamic exterior, a more comfortable interior and a long list of practical and luxury features, such as a blind spot monitor and a standard backup camera.

But it lacks the type of changes Gutierrez hinted at. For instance, the choice of engines remains the same. General Motors, meanwhile, is offering more powerful and efficient motors with its new Chevy and GMC full-size pickups, which go on sale in the spring. And at last month's Detroit auto show, Ford gave a sneak peak of a new F-Series truck — due out next year — which it says will weigh far less to improve fuel economy.

Instead, the world's leader in auto sales seems happy to protect the Tundra's 6 percent share of the big pickup market — especially when truck sales are rising as the economy recovers from the Great Recession. Gas mileage will be about the same as the current Tundra, 18 to 20 miles per gallon (between 11.7 and 13 liters per 100 kilometers) on the highway, Toyota says.

"We're very comfortable with what our volume is in that segment," Lentz said last month.

Truck-buyer loyalty gives companies like Ford —which started building pickups in 1925, 40 years before Toyota sold its first pickup in America — a real advantage. Last year, 36 percent of F-150 buyers traded in an F-150, according to Edmunds.com. That's better than the loyalty rate for Toyota's best-selling Camry sedan. Only about 28 percent of Tundra buyers traded in a Tundra last year.

When Toyota's first big pickup came out in the early 1990s, it didn't measure up to the F-Series, Chevrolet Silverado or Chrysler's Ram. It was smaller and lacked the powerful engines needed to tow heavy loads. Sales in 2006 — a huge year for trucks — were just under 125,000, only a fraction of the nearly 800,000 F-Series trucks sold by Ford.

But Toyota had its sights set on Detroit. It built the Tundra at a factory in Texas, the heart of truck country. The new Tundra had a brawnier look, a larger bed and a 5.7-liter, 381-horsepower V-8. It was 700 pounds heavier, and its towing capacity increased by 3,000 pounds. Toyota brazenly predicted sales of 200,000 a year. In 2007 it came close, selling almost 197,000.

Detroit soon updated its pickups with powerful and more efficient engines, new transmissions and innovative features. Then the financial crisis and recession hit and truck sales fell at all automakers. Tundra sales hit a low of 79,000 in 2009. About 102,000 Tundras were sold last year, still less than one-sixth of Ford's 645,000.

Detroit is using that cash to develop new cars and — it hopes — win back customers it's been losing to the Japanese for 30 years.

Even Nissan, a distant fifth-place finisher in the big pickup race, has plans for a reworked Titan. Nissan sold just 22,000 Titans last year, slightly over 1 percent of the market. But the truck still makes money, says Pierre Loing, vice president for product planning. The market is big and has relatively few competitors, so there's opportunity, he said.

"If you manage to grab a small segment share, you quickly get some big numbers," Loing said.

Buyers who waited for years to replace trucks are rewarding themselves by loading them with options, and Toyota intends to take advantage of that, says Bob Carter, a Toyota senior vice president in the U.S. The company added two premium lines, including the "1794 Edition," named for the San Antonio ranch— founded in 1794 — where the Tundra plant is located. The 1794 has fancy saddle-like leather seats that are heated and cooled.

Sales of large pickups rise and fall with the economy. In 1980, big pickups accounted for 10 percent of all U.S. sales, then tapered off in the ensuing recession, according to Ward's AutoInfoBank. Sales peaked at 15 percent of the U.S. market in 2004, when gas was cheap. But they fell again in the latest recession, and ended 2012 at 11 percent of the market.

Last year the market surged to 1.6 million, and Carter expects it to rise to around 1.8 million in the coming years as the housing industry recovers and small businesses replace older trucks. The average pickup on U.S. roads is just over 11 years old. Pickup sales rose almost 25 percent in January.

But Schuster says Toyota still won't be able to take sales from GM, Ford and Chrysler.

"They'll be part of the recovery," he says. "I don't see them capturing any share from the Detroit guys."