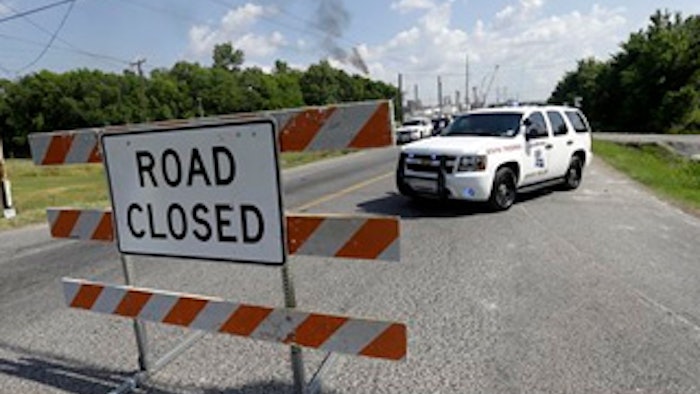 DONALDSONVILLE, La. (AP) — A second blast in two days has killed a worker at a south Louisiana chemical plant, just miles from the site where two workers were killed a day earlier.

Sandifer said the explosion didn't pose a threat to the area surrounding the plant.

Nitrogen was being offloaded by hose from an 18-wheeler and pressurizing an metallic "vessel" when the pressure built and caused the explosion, Sandifer said.

He said the vessel was designed "to hold thousands of pounds of pressure and it failed," causing a blast that could send someone flying and scatter pieces of metal.

"It did horrific damage to the area," Sandifer said.

He said the state police's hazardous materials unit will inspect the plant to ensure that it's safe and help determine if there was negligence involved.

On Thursday, an explosion at a chemical plant in Geismar owned by Williams Cos. Inc. led to two deaths and injured dozens of others. Donaldsonville and Geismar are both located in Ascension Parish and straddle the Mississippi River, between New Orleans and Baton Rouge.

Deerfield, Ill.-based CF Industries said in a news release that one person was killed and seven others were injured in Friday's incident, which occurred at about 6 p.m. CDT in a part of the plant that had been shut down for maintenance activity.

"The incident involved the rupture of an inert nitrogen vessel during the off-loading of nitrogen," the news release said. "There was no fire or chemical release nor is there any threat or hazard posed to the community."

CF Industries manufactures ammonia and other nitrogen fertilizers at its Donaldsonville plant.

"Our focus is on our number one priority — the health and safety of our employees and the community," plant manager Lou Frey said in a statement. "We are deeply saddened by the loss of one of our employees."

This isn't the first deadly blast at the company's Donaldsonville plant. Three workers were killed and nine others were injured by an explosion and fire at the facility in May 2000.

Later that year, the Labor Department's Occupational Safety and Health Administration imposed a fine of nearly $150,000 against CF Industries. OSHA cited the company for 14 alleged safety and health violations, 12 of which were described by the agency as serious. The company didn't contest the citations and agreed to pay the penalties.