For Obama's Climate Plan, Devil Is In The Details

Frustrated by a recalcitrant Congress, President Barack Obama has vowed to take climate change into his own hands. Now he has to deliver. Three weeks after giving an ambitious speech to outline his proposal, the president begins the arduous task of executing it. Obama's plan is a complicated mix of rule-making and federal permitting that's tough to encapsulate in a neat sales pitch — and may be even tougher to put into action. 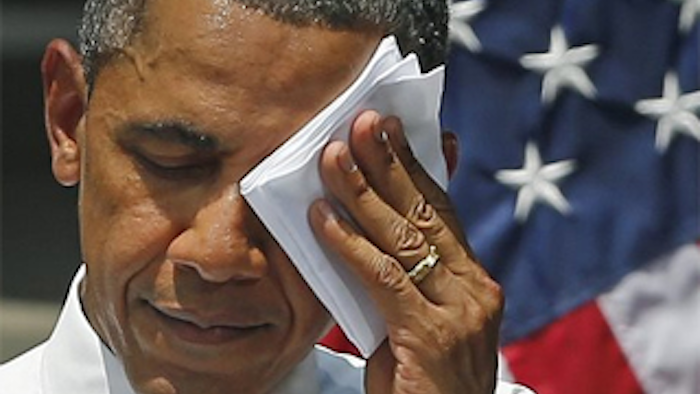 WASHINGTON (AP) — Frustrated by a recalcitrant Congress, President Barack Obama has vowed to take climate change into his own hands. Now he has to deliver.

Three weeks after giving an ambitious speech to outline his proposal, the president begins the arduous task of executing it. Obama's plan is a complicated mix of rule-making and federal permitting that's tough to encapsulate in a neat sales pitch — and may be even tougher to put into action.

By pledging to use his authority under existing laws, Obama freed himself from the need to sell the plan to skeptical lawmakers whose support he would need if he had to push a major climate change bill through Congress. Even so, he still needs public support to help shield vulnerable Democrats already facing criticism over the plan; their fate in the 2014 elections will determine whether Obama can accomplish much of anything during his final two years.

"While he can do some stuff on his own, he can't do others," said Jim Messina, Obama's 2012 campaign manager. "Congress needs to act on some of these things." Messina is now chairman of Organizing for Action, the group formed from Obama's campaign to advocate for the president's agenda.

The centerpiece of Obama's plan is imposing the first-ever limits on carbon dioxide emissions from existing power plants. This will require each state to draft its own compliance proposal, placing a major component of Obama's legacy largely in the hands of governors and state policymakers, many of whom are deeply skeptical about the plan and what it could mean for local economies.

Obama knows the clock is ticking. Most of what he has proposed will take years to carry out, and he only calls the shots through 2016. So his aides, Cabinet secretaries and allies are fanning out, trying to start putting the plan in place as soon as possible.

The president took some steps almost immediately after unveiling his proposal. Energy Secretary Ernest Moniz overhauled an $8 billion loan-guarantee program, one that had largely sat dormant for 5 years, to spur new technologies. Interior Secretary Sally Jewell approved a wind project in Arizona that the administration says will power up to 175,000 homes.

And the Environmental Protection Agency quickly sent a reworked proposal for emissions limits on new power plants to the White House.

When the Obama administration first proposed the limits last year, the energy industry balked, arguing the EPA was being heavy-handed because it used the same standard for natural gas as for coal. The industry argued this would mean a moratorium on new coal plants because the technology needed to retrofit plants to meet the standard isn't commercially available or cost-effective.

The new version of the rule hasn't been publicly released. But a senior White House official said the limits will now use different standards for natural gas and coal, essentially bowing to claims that the original rule was ill-conceived. The official was not authorized to divulge details about the rule ahead of its release and spoke on condition of anonymity.

Other steps have yet to be taken. The White House and the EPA are focusing on finishing the rules for new plants before they turn to the far trickier proposition of regulating existing plants.

Coordination and outreach to the 50 states won't ramp up until the fall, the official said. Obama's team insists it is confident it can convince states to go along with Obama's plan.

Heather Zichal, Obama's top energy and climate adviser, said important steps are being taken even in Republican-led states such as Texas and Utah, where local leaders have been confronted firsthand with drought and other environmental challenges blamed on climate change.

"The conversation outside the (Washington) Beltway is much different than the conversation inside the Beltway," Zichal said. "You will see us trying to connect those dots."

But don't expect Obama to try to sell the plan in the same ways he did with immigration and health care. With climate change, Obama can't fly around the country rallying Americans to demand their House members and senators vote yes on a bill. That's because there isn't one.

Even so, Obama has signaled he wants Americans engaged on the issue. He's deployed his "Energy Cabinet" — Moniz, Jewell, his agriculture and EPA chiefs and others — around the country to explain what the administration is doing and why. The White House said Obama, too, will be part of that effort, although it hasn't said whether he'll travel or make big speeches to tout the plan.

Obama's aides see parallels with gay marriage, arguing there's been a dramatic shift in public opinion on climate change that benefits their side.

On some levels, they're right. When AP-GfK asked Americans in November whether global warming, left unabated, would become a serious U.S. problem, 80 percent said it would — about the same as in 2009. In those three years, though, those who doubt climate change has been occurring have become less certain about it. In 2009, 52 percent of those who questioned climate change said they were sure it was false. In 2012, that figure dropped to 31 percent.

For Obama's supporters, criticizing those who doubt climate change has become something of a sport — a rallying cry for the Democratic base the same way Obama's so-called "war on coal" has become a conservative mantra. Organizing for Action, Messina's group, is calling out every member of Congress who doubts the planet is getting warmer.

The challenges ahead are easy to spot. The authority Obama is invoking comes from the Clean Air Act, a labyrinthine 1960s-era law that's never been used to regulate heat-trapping gases from existing power plants. The law says EPA must publish guidelines and give states time to create their own plans to meet those goals. Then the EPA gets to approve or reject those plans, setting up likely confrontations with Republican governors and some coal-state Democrats who want nothing to do with making life harder for local industry.

But if states simply refuse to propose their own plan, EPA gets to write the plan for them. It's a heavy lift with echoes of Obama's health care law, under which Washington will operate new insurance exchanges in more than half the states, after states refused to do so themselves.

"There's absolutely no precedent here," said Jeffrey Holmstead, who ran the EPA's air and radiation division under President George W. Bush. "The EPA has been given the task of fitting a very large square peg into a very small round hole."