The announcement came just days before the kickoff of the holiday shopping season. It also comes as Wal-Mart is trying to boost sales in the U.S. and abroad amid a challenging global economy that's weighing on its low-income shoppers. 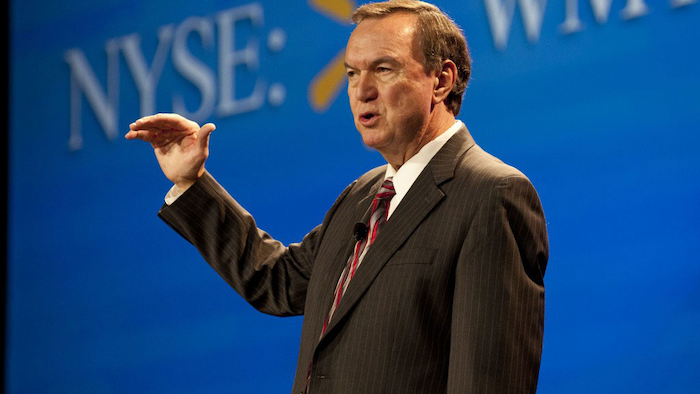 Duke, 63, who had been with Wal-Mart since 1995, had been at the helm since February 2009. Duke will stay on as chairman. McMillon, 47, marks the fifth CEO since Wal-Mart's founder Sam Walton, and all of them have been home-grown with years of experience before taking the helm.

McMillon was also elected to the company's board of directors, effective immediately.

McMillon, who succeeded Duke as head of the international business four years ago, is a 23-year company veteran. He started as a summer associate in a Wal-Mart distribution center in 1984 and then in 1990, he rejoined Wal-Mart at a Tulsa, Okla., store. He then moved up the executive ladder, working in a variety of merchandising jobs at the Wal-Mart U.S. division. Before he took over international operations, McMillon served as president and CEO of Sam's Club from 2006 to 2009.

"This leadership change comes at a time of strength and growth at Wal-Mart," said Rob Walton, chairman of Wal-Mart's board of directors. "The company has the right strategy to serve the changing customer around the world, and Doug has been actively involved in this process. The company has a strong management team to execute that strategy."

The announcement came just days before the kickoff of the holiday shopping season. It also comes as Wal-Mart is trying to boost sales in the U.S. and abroad amid a challenging global economy that's weighing on its low-income shoppers.

It's also confronting a host of issues that are hurting its reputation. It's grappling with allegations of bribery in its Mexico operations that surfaced in April 2012 as well as criticism over its treatment of its hourly workers. Wal-Mart is also facing pressure to increase its oversight of factory conditions abroad following a building collapse in April in Bangladesh that killed more than 1,127 garment workers. The tragedy is the deadliest incident in the history of the garment industry.

Dave Tovar, a spokesman at Wal-Mart said Duke's decision to leave Wal-Mart was "a personal one," and he said it had nothing to do with the bribery allegations.

"He decided it was time to retire," Tovar told The Associated Press. He added that Duke approached Walton and the board voted Friday.

Duke, became CEO in February 2009. He assumed the top role when the retailer's strong performance made it the rare winner during the Great Recession, but that soon changed a few months after he took the helm.

As the economy slowly recovered, times got tough for Wal-Mart, resulting in a more than two-year slump in its U.S. namesake business. Customers who were hurting financially spent less and others fled to competitors offering better convenience. The company also blamed mistakes in pricing and merchandising. And its move to declutter its stores backfired when shoppers couldn't find their favorite products.

The decision to clean up the stores was not made on Duke's watch, but Wal-Mart's detour away from its everyday low price strategy to temporarily slashing prices on key items was. During Duke's tenure, he named a new U.S. executive team, which reversed the slump in the third quarter of 2011 by restocking thousands of items and pushing low prices across the store.

But those gains have been reversed since early this year. The U.S. Wal-Mart business has posted three straight quarterly declines in a key sales metric, breaking the streak of consecutive quarterly revenue gains. The company has blamed a combination of factors but particularly financial pressures shoppers are facing.

The management transition also comes when Wal-Mart is trying to fight off online rivals like Amazon.com, eBay Inc. and other online retailers, which are luring shoppers to the Web with their vast offerings of products and low prices.

The discounter is also following its own shoppers, who are buying and researching on their smartphones and tablets. Under Duke's stewardship, the company has launched a number of initiatives that have merged its online business with the power of its more than 4,000 stores. That includes launching same-day delivery in five markets and new shopping apps.