Growth has marched steadily downward over the past two years as Beijing clamped down on a spending boom that analysts worry has pushed debt to dangerous levels. That has meant less Chinese demand for imported goods from copper and cement to factory machinery and earth movers. 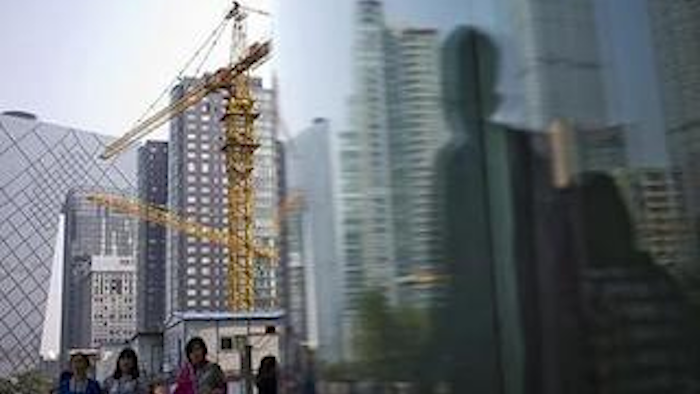 BEIJING (AP) -- The reaction was slow in coming, but financial markets and corporate bosses have been jolted awake to China's relentless growth decline and are scrambling to cope with wrenching changes in global business.

For the past decade, China poured money into building new factories, highways and apartment blocks. That propelled explosive growth at home and a flood of money to exporters of iron ore and other commodities such as Australia and Peru.

But now, Beijing has put the brakes on that boom. Like a captain turning a heavy ship in choppy seas, its leaders are trying to steer the world's second-largest economy away from reliance on investment and toward being a consumer society.

Growth has marched steadily downward over the past two years as Beijing clamped down on a spending boom that analysts worry has pushed debt to dangerous levels. That has meant less Chinese demand for imported goods from copper and cement to factory machinery and earth movers.

China is far from falling off a financial cliff, but last year's 7.7 percent growth was barely half of 2007's 14.2 percent. Global stock markets slid after an unexpected fall in January manufacturing drew attention to the depth of the slowdown. Growth looks set to fall further amid weakness in trade, retail sales and manufacturing.

"The growth slowdown this year will be faster than many expect," said economist Diana Choyleva of Lombard Street Research in a report.

Already, slumping Chinese demand has led to job cuts at mines in Australia and elsewhere. Other companies that looked to China to drive revenues are cutting sales forecasts. Some have pulled out and profits are down, possibly endangering jobs abroad.

As for Chinese companies, they face tougher competition at home. That, combined with weaker investment, could lead to job or wage cuts if Beijing fails to manage the challenges of its transition. That might hurt consumer spending, leading to a downward spiral.

"It would then become a race to the bottom," said Choyleva.

A look at losers and possible winners from China's slowdown:

China's voracious appetite for commodities propelled a boom in Australia and emerging economies in Africa and Latin America. With revenues down, exporters are cutting jobs and governments are tightening their spending.

The International Monetary Fund has reduced its 2014 growth forecasts for South Africa, Brazil, the Middle East and Southeast Asia. Caterpillar Inc. has cut 13,000 jobs, blaming slower Chinese growth and weak spending by miners, and says it will cut more.

Hardest-hit might be poor countries in Africa or Latin America that might have to cut ambitious plans for spending on education and other social programs.

Global companies have long seen China as one of their most promising markets, and most frustrating.

China is the biggest market for Volkswagen AG and some other automakers. Yum Brands, the U.S.-based operator of Pizza Hut, KFC and Taco Bell, already gets half its revenue from China. But U.S. and European companies are being squeezed by tougher competition and by Beijing's efforts to limit access to promising industries such as clean energy.

Cosmetics brand Revlon Inc. says it will pull out of China. Actavis PLC, a generic drug maker, is leaving too. Sales of Swiss watches in China fell last year after an anti-corruption crackdown crimped gift-giving.

The Communist Party has promised to open more industries such as Internet commerce and logistics to foreign competitors. But previous market opening initiatives have been tempered by conditions that include handing technology to potential Chinese competitors.

China buoyed the global auto industry after the 2008 crisis. It passed the United States as the world's biggest car market in 2009 and annual sales still are rising by double-digit rates. But growth is decelerating sharply.

That steps up pressure on China's fledgling automakers while global rivals add to their market share. Sales by independents grew by 11.4 percent last year, slower than the overall market at 15.7 percent. Their market share slipped by 1.6 percentage points to 40.3 percent.

This year's market growth is due to slow to about 10 percent. Independents will face increased pressure to merge or close.

One bright spot is Beijing's effort to encourage consumer spending. China's market for consumer-oriented goods such as wheat from Brazil, soybeans from Minnesota and French wine is growing. Such sales could accelerate if Beijing can persuade households to spend more. Also, suppliers to fields the Communist Party is promoting such as health care, energy efficiency and pollution control could see more opportunities.