A Swiss team planning to complete the first round-the-world solar flight next year unveiled a new version of their unique aircraft Wednesday, which they say could remain in the air indefinitely. 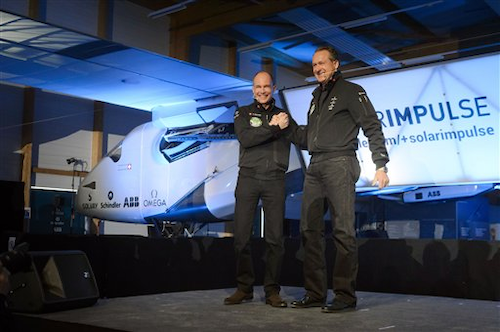 PAYERNE, Switzerland (AP) -- A Swiss team planning to complete the first round-the-world solar flight next year unveiled a new version of their unique aircraft Wednesday, which they say could remain in the air indefinitely.

Pilots Bertrand Piccard and Andre Borschberg said the Solar Impulse 2 improves upon the single-seater prototype that first took flight five years ago, and which has since demonstrated that a solar-powered plane can fly through the night, between two continents and across the United States.

The updated plane presented to the world at the Payerne Air Force Base in Switzerland has better batteries for storing energy soaked up from the sun by the 7,200 solar cells that cover its massive wings.

At 72 meters (236 feets) its wingspan is eight meters longer than the first prototype — longer even than the wings of a Boeing 747 jumbo jet — but still only weights 2.3 metric tons (2.54 tons), about as much as a large car.

The materials in the updated plane are also lighter than before, it has more efficient electric motors, and a "good business class seat," Borschberg said.

That's important, because while the journey will be broken up into several stages, the aircraft's slow speed means it will have to stay in the air for several days in a row during the long transoceanic legs.

Borschberg said the trip next year would take about 20 flying days, spread over several months.

Some 80 companies contributed cutting-edge technologies to the plane, which is meant to showcase the possibility of using cleaner energy sources.