After listening to a month's worth of testimony from expert witnesses hired by Apple and Samsung, a Silicon Valley jury was tasked with sorting out the latest legal dispute over technology between the world's two largest smartphone makers. 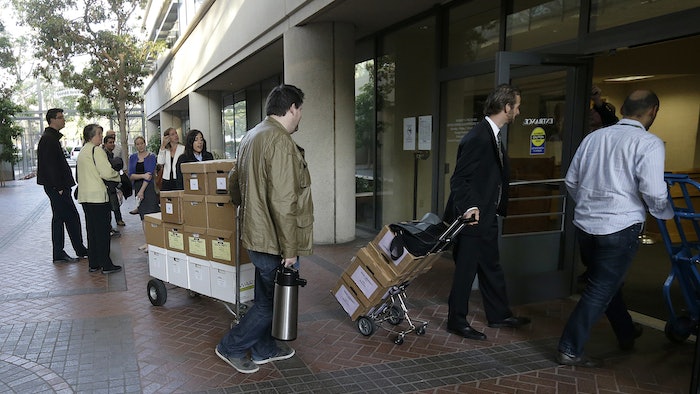 SAN JOSE, Calif. (AP) — After listening to a month's worth of testimony from expert witnesses hired by Apple and Samsung as well as executives from each company, a Silicon Valley jury of four men and four women were tasked with sorting out the latest legal dispute over technology between the world's two largest smartphone makers.

Apple is demanding Samsung pay it $2.2 billion after accusing the South Korean company of infringing five software patents related to smartphones. Samsung denies the claims and counters that Apple owes it a little more than $6 million for infringing two of its patents.

The jury began deliberating late Tuesday and left at 4:30 p.m. PDT without reaching a verdict. The jurors are scheduled to resume deliberations Wednesday morning in San Jose.

A lawyer for Apple on Tuesday accused Samsung of copying key features of its iPhone and iPad products and demanded $2.2 billion in damages.

An attorney for Samsung denied the allegations and argued that its Google-developed software differs from Apple's operating system.

In his closing argument, lawyer William Price referred to an email from Apple founder Steve Jobs indicating that he had ordered employees to wage a "holy war" against Google and its Android system, believing it was a rip-off of Apple's operating system.

Price said that was the sole reason Apple filed the lawsuit against Samsung.

"We don't think we owe Apple a nickel," added John Quinn, one of four Samsung lawyers involved in the company's closing argument.

"They want to attack Google and Android by attacking the most successful Android maker," he said.

Apple lawyer Harold McElhinny told jurors that Samsung's "illegal strategy has been wildly successful" and insisted that Google had nothing to do with the case.

"Despite all the times Samsung mentioned it, you will not find a single question about Google in your jury form," McElhinny said. "Google is not a defendant in this case."

The four men and four women on the jury began deliberating later in the day.

The case marks the latest legal fight between Samsung and Apple as each tries to dominate the $330 billion annual market for smartphones.

Samsung has captured about 31 percent of the smartphone market while Apple retains a 15 percent share.

A different jury in San Jose presiding over a previous trial regarding older technology ordered Samsung to pay Apple $930 million. Samsung has appealed that ruling.

Google may not be a defendant in the current trial, but evidence introduced by Apple attorneys showed the Internet search giant has agreed to reimburse Samsung if the South Korean company is ordered to pay damages on two of the five patents at issue.

Samsung, meanwhile, has alleged that Apple infringed two of its patents related to camera use and video transmission. Samsung is seeking $6.2 million in damages.

Jobs, who died in 2011, is a Silicon Valley legend revered for launching Apple in his family's garage in 1976. The Cupertino headquarters of the tech giant is a 15-mile (25-kilometer) drive from the San Jose federal courthouse where the patent case is playing.

Prospective jurors were closely questioned before the trial about connections and views about Apple, which employs about 80,000 workers worldwide.