Five employees of a company accused of selling expired beef and chicken to McDonald's, KFC and other restaurants in China were detained by police Wednesday after an official said illegal activity was an organized effort by the supplier. 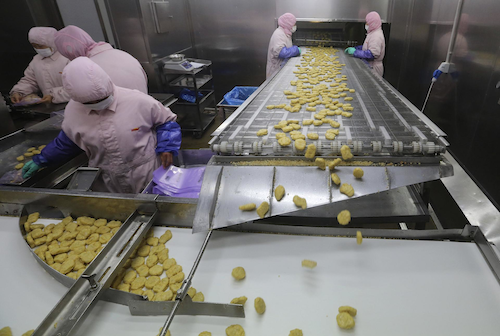 BEIJING (AP) -- Five employees of a company accused of selling expired beef and chicken to McDonald's, KFC and other restaurants in China were detained by police Wednesday after an official said illegal activity was an organized effort by the supplier.

China's food safety agency said on its website that its investigators found unspecified illegal activity by Husi Food Co. but gave no confirmation expired meat had been found or other details.

Some of the illegal conduct was an "arrangement organized by the company," the deputy director of the agency's Shanghai bureau, Gu Zhenghua, told the official Xinhua News Agency.

Those in criminal detention include Husi's quality manager, the Shanghai police department said on its microblog account. The one-sentence statement gave no details of possible charges or the employees' identities.

The scandal surrounding Husi, which is owned by OSI Group of Aurora, Illinois, has alarmed Chinese diners and disrupted operations for fast food chains.

It erupted Sunday when a Shanghai broadcaster, Dragon TV, reported that Husi repackaged old beef and chicken and put new expiration dates on them. It said they were sold to McDonald's, KFC and Pizza Hut restaurants.

Xinhua said the manager of Husi's quality department, Zhang Hui, told investigators "such meat had been produced under tacit approval of the company's senior managers." It said the company "has been conducting the malpractice for years."

An employee who answered the phone at the food agency office in Shanghai declined to give any additional details.

A woman who answered the phone at Husi's Shanghai headquarters said the company would not comment until the investigation was completed. She declined to give her name.

Yum, which also owns Pizza Hut, said in a statement Wednesday is was immediately ending "all procurement from OSI China," including from the plant in question. The company, based in Louisville, Kentucky, noted that OSI is not a major supplier for its restaurants in the country and that it has arranged for alternative suppliers to step in.

"We do not anticipate disruption to KFC restaurants. While there may be some temporary shortages of certain products at Pizza Huts, we expect this to be minimized and short-term," the company said.

Yum also said it reserves the right to "take any and all legal action against OSI Group" based on the results of the investigation.

During a conference call Tuesday to discuss its financial results, McDonald's Corp. CEO Don Thompson said the company felt a "bit deceived" about the plant in question. Thompson noted the company was no longer serving products from that plant.

If the allegations prove to be true, Thompson said the company would deal with the matter "effectively, swiftly and appropriately," although he didn't specify what that would entail.

The scare has also spread to Japan, where McDonald's said 20 percent of the meat for its chicken nuggets was supplied by Husi.

Product safety is unusually sensitive in China following scandals over the past decade in which infants, hospital patients and others have been killed or sickened by phony or adulterated milk powder, drugs and other goods.

Husi said in a statement earlier this week it was "appalled by the report" and believed it to be an "isolated event." It promised to cooperate with the investigation and to share the results with the public.

The State Food and Drug Administration's statement Wednesday said investigators seized 160 tons of raw material and 1,100 tons of finished products from Husi. The agency said earlier its investigation would extend to Husi facilities in Shanghai and five other provinces.

Foreign fast food brands are seen as more reliable than Chinese competitors, though local brands have made big improvements in quality.