Chinese regulators have launched a series of anti-monopoly investigations of foreign automakers and technology providers, stepping up pressure on foreign companies that feel increasingly unwelcome in China. 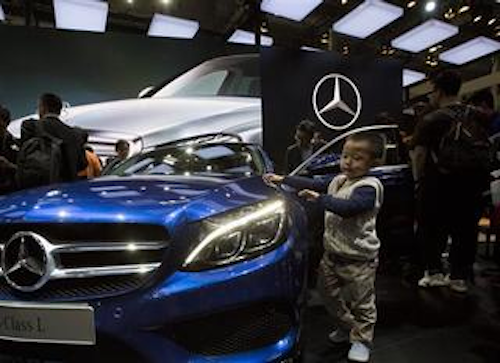 BEIJING (AP) -- Chinese regulators have launched a series of anti-monopoly investigations of foreign automakers and technology providers, stepping up pressure on foreign companies that feel increasingly unwelcome in China.

On Wednesday, a regulator said Chrysler and Germany's Audi will be punished for violating anti-monopoly rules. Mercedes Benz and Japanese companies also are under scrutiny. A probe of Microsoft was announced last week.

The investigations are fueling unease among foreign companies that complain Beijing uses regulatory measures to hamper them and promote potential Chinese competitors in technology and other fields in violation of its free-trade commitments.

Regulatory conditions are "less certain and more challenging," said James Zimmerman, a former chairman of the American Chamber of Commerce in China and managing partner of the Beijing office of law firm Sheppard Mullin Richter and Hampton.

In an apparent effort to force down consumer prices, regulators have launched investigations of foreign auto, technology, pharmaceutical and dairy companies over the past two years using a 2008 anti-monopoly law.

In the auto industry, investigations appear to have been prompted by complaints prices of imported vehicles are too high and foreign automakers abuse their control over supplies of spare parts to gouge customers.

"They will be punished accordingly," said the official, Li Pumin, according to the official Xinhua News Agency. The report gave no details of penalties.

Chrysler, Audi and Mercedes Benz, a unit of Germany's Daimler AG, had pre-emptively announced price cuts in response to the investigations.

On Sunday, Mercedes cut prices of replacement parts such as windshields and pumps for power steering by up to 29 percent. Audi announced cuts of up to 38 percent in July. On Tuesday, Chrysler announced a 20 percent price cut for its Grand Cherokee SRT8 and Grand Cherokee 5.7L models.

Imported luxury cars in China can cost three times what they do in the United States or Europe. Automakers say most of the difference is due to import and other taxes.

As for spare parts, automakers control supplies and can charge higher prices because they bar their component suppliers in China from selling to other retailers, said analyst John Zeng of LMC Automotive. He said an automaker might charge as much as 5,000 to 6,000 yuan ($800 to $1,000) that cost 200 yuan ($30) to produce.

"I think there are some monopoly situations there," said Zeng.

Others under investigation in the auto industry include 12 Japanese companies, according to another state news agency, the China News Service.

Business groups welcomed the 2008 law as a step toward clarifying operating conditions in China. Since then, they have said it is enforced more actively against foreign companies than against their Chinese rivals.

Microsoft is under investigation regarding its Windows operating system and how it handles compatibility, bundling and publication of documentation, according to the State Administration for Industry and Commerce.

Microsoft said in a statement it "complies with the laws and regulations of every market" where it operates.

"Our business practices in China are designed to be compliant with Chinese law," the company said.

Microsoft suffered another setback in May when the government announced it would not buy equipment that runs on the U.S. software giant's Windows 8 system. The government gave no explanation but a separate announcement the same week said it would start examining imported information technology for security flaws and bar suppliers that fail.

Also under investigation are Qualcomm Inc., a San Diego, California-based supplier of chips used by Chinese manufacturers of smartphones and other mobile devices, and InterDigital Inc., of Wilmington, Delaware, which licenses technology patents. The government has said it was looking into whether they abused their market dominance.

China is the world's biggest manufacturer of mobile phones and other wireless devices but relies on foreign technology. Communist leaders have decreed the investment of billions of dollars of investment in developing the country's own know-how, but progress is slower than they want.

The official China Daily newspaper on July 25 quoted an NDRC official as saying Qualcomm "has a monopoly." It gave no indication what possible penalties or orders to change business practices it might face.

Apple Inc. also has come under attack by Chinese state television, which claimed the location feature on its iPhone could allow the company to steal secrets and threaten national security. The company denied it worked with any foreign governments to create "backdoor access" and said location data stays in the phone.

"Companies are increasingly cautious about future investments," said the American Chamber of Commerce in China in its April report.

Reasons include "market access restrictions, concerns with regard to government policies and perceptions that foreign business faces a less welcome environment," it said.