McDonald's said Monday that a scandal over a meat supplier in China is hurting sales in the region and its global sales forecast for 2014 is "at risk." 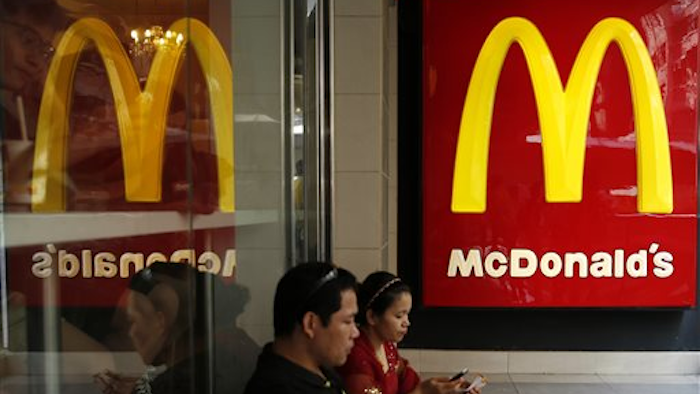 NEW YORK (AP) — McDonald's said Monday that a scandal over a meat supplier in China is hurting sales in the region and its global sales forecast for 2014 is "at risk."

The world's biggest hamburger chain said in a regulatory filing that there's been "significant negative impact" in China, Japan and other affected markets. These regions make up about 10 percent of McDonald's Corp.'s revenue.

The Oak Brook, Illinois-based company had previously said it expected the worldwide sales measure to be "relatively flat" for the year.

The updated guidance comes after a Chinese TV report last month showed workers at one of McDonald's meat suppliers in Shanghai using expired meat. The supplier, Shanghai Husi Food Co., is a division of OSI, a company based in Aurora, Illinois that has been a longtime supplier to McDonald's around the globe. It counts numerous other fast-food chains as its clients.

Yum Brands Inc. had also warned last week that the bad publicity has "shaken consumer confidence" and resulted in "significant, negative impact" at its KFC and Pizza Hut chains in China. The company, based in Louisville, Kentucky, has said it didn't get a significant amount of ingredients from Husi and quickly moved to cut ties with OSI. But Yum had also been working to recover from a separate scandal over its chicken suppliers in 2012.

On Monday, OSI also issued a statement saying six of its employees in China have been detained by the Shanghai branch of the Public Security Bureau. Previously, Chinese regulators had said five employees had been detained.