The privately held company turned 80 this year and is pushing to update its image, reach a new generation of customers, and make its mark in a more sophisticated and savvy marketplace. 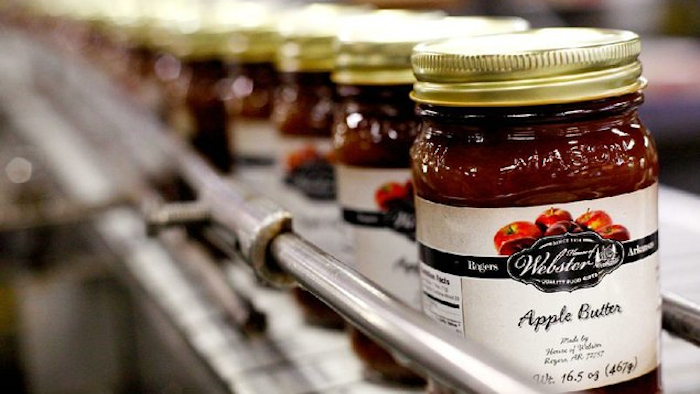 At the House of Webster, it's all about the jams, jellies, apple butter, syrups, mustard and relish — all things that can be packaged in a Mason jar.

The privately held company turned 80 this year and is pushing to update its image, reach a new generation of customers, and make its mark in a more sophisticated and savvy marketplace, the Arkansas Democrat-Gazette reported.

Founded by Roy Webster in Rogers in 1934, House of Webster sells its products in gift shops, amusement parks and natural-food stores across the U.S. It also does contract packing for third-party clients and offers personal and corporate gift packages. House of Webster was purchased by Griffin Foods of Muskogee, Okla., in 2006.

House of Webster makes all its products, with the exception of pickles, meats and cheeses, at its 100,000-square- facility in Rogers. The plant can make 2,000 12-jar cases of product in a day and produced about 365,000 cases last year. It employs about 60, but in the months around the Christmas holiday, the workforce swells to about 100 to keep up with demand.

Just like nearly every other business in the nation, House of Webster took a hit the economic crisis struck in 2008. Folks without work or who are watching their pennies don't buy specialty foods or give as many gifts. The company's corporate customers felt the pinch, too.

"We had to adapt," said Ryan Funa, the company's general manager and director of sales.

He declined to give annual revenue numbers but said that in recent years, sales at House of Webster have been trending upward, with more wholesale sales, more companies needing contract packaging work, and more regular folks and corporations willing to give gift packages.

According the State of the Specialty Food Industry 2014 report, commissioned by the Specialty Food Association trade group, total sales in the segment, which includes retail sales and food service, were $88.3 billion in 2013, up 18.4 percent when compared with 2011. The 2013 sales figures were a new record. Sales are up 47 percent since 2008, when the segment reported total sales of $60.1 billion.

In 2013, specialty food made up 10.4 percent of the total food market, according to the report. Retail sales make up 80 percent of sales in 2013, with food service accounting for 20 percent.

Sales in specialty food stores were up 42.4 percent from 2011 and up 33.8 percent in natural markets, while mainstream supermarket sales, which make up more than two-thirds of the segment, grew 6.9 percent, according to the report.

In 2013, cheese-topped specialty foods sales at retail locations came in at No. 1 with $4 billion in sales; meat, poultry and seafood came in second; and chips, pretzels and snacks placed third. Seventy percent of retailers said local products interest consumers most.

The leadership at House of Webster contends that the things making the company's products desirable for so long — flavor, quality ingredients and local flair — are just as attractive with customers today, if not more so. The trick is how to get that message out to modern food aficionados.

"We need to make some noise," said Ryan Castrellon, a company sales representative who was hired, in part, to help fashion House of Webster's online presence.

The company plans to offer a significantly upgraded website that will be more interactive and user friendly in early October and will be more involved in social media platforms such as Facebook, Pinterest, Tumblr and Instagram.

Castrellon said House of Webster will talk to food bloggers and try to establish partnerships with them in an effort to reach younger, food-savvy consumers. He said these types of market influencers have more credibility with the customers House of Webster wants to reach.

"They're not going to put it out there unless it's delicious," Castrellon said of the bloggers.

Louise Kramer, public relations director for the Specialty Food Association, said while online sales are still a small part of overall sales in the segment, online conversations about the subject are highly influential and companies need to be relevant online.

"They need to reach out," Kramer said. "Word of mouth is really key."

The gift-giving segment at House of Webster is regaining traction, Funa said, and he predicts continued growth in both the personal and commercial segments. The company is offering more types of customization in its gift products, even down to the labels, that customers can create to celebrate a wedding, graduation or family reunion.

Food Gifting in the U.S., 4th Edition, released in May by Maryland-based market research firm Packaged Facts, projects the sales of food gifts will reach $21.1 billion in 2014, up 4.9 percent from the year earlier. About 60 percent of that figure is consumer sales and is expected to grow 5.1 percent, while corporate sales are 40 percent of the total and are expected to increase 4.7 percent in 2014. For purposes of the report, food gifts must be packaged in a way to make them suitable presents and must be purchased.

The report indicates the 2008 recession had a significant effect on sales as consumers' disposable income lessened, but things are looking up as middle-income consumers are returning to gift-giving.

The report notes that of the 55 percent of those giving food as a gift, quality was the most sought-after attribute. Nearly four in 10 food-gift givers said the product needed to come from a trusted store or source.

Chef Will West is one of the House of Webster's not-so-secret weapons, Funa said. He refers to himself as a food translator — taking a product that's often made on a small scale and reproducing it authentically for manufacture.

"Our products reach tens of thousands, if not millions of people," West said.

That skill requires years of experience and a lot of know-how regarding sourcing, be it buying the freshest tomatoes for salsa, finding the best strawberries for jam or ferreting out a supplier of blackberries for preserves when the fruit is in short supply.

It also requires a lot of help.

When testing products, West doesn't just rely on his own palate. He often uses the whole staff at the House of Webster, from the big bosses to those working on the line, for taste tests and comparisons.

"We do a lot of cooking, tasting and testing," he said.

In the end, flavor is the factor that makes or breaks a company like House of Webster.