Apple risks having to repay Ireland tax rebates worth billions of dollars after the European Union's competition watchdog said Tuesday the company appears to be benefiting from illegal tax deals there. 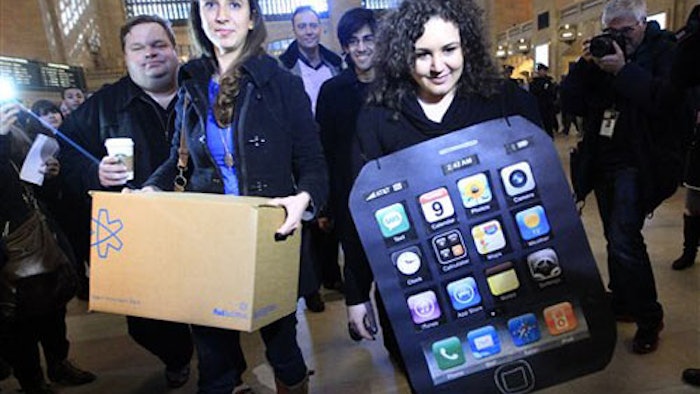 Brussels — Apple risks having to repay Ireland tax rebates worth billions of dollars after the European Union's competition watchdog said Tuesday the company appears to be benefiting from illegal tax deals there.

In a preliminary report into the company's overseas tax practices, the 28-nation bloc's executive Commission said the low tax treatment Ireland is granting Apple counts as state aid and could be illegal under EU law.

If the finding is confirmed, Apple Inc. could face a huge repayment bill because it funnels the bulk of its international sales through subsidiaries in Ireland.

To keep market competition fair, the EU forbids governments from helping individual companies. The EU first announced the tax probe in June, also targeting coffee chain Starbucks and others as part of a crackdown on multinationals exploiting tax loopholes.

The EU Commission is now requesting further documents from Ireland before making a legally binding decision on whether the rebate granted to Apple is illegal and must be recouped, wholly or partially.

The EU probe focuses on exaggerated transfer pricing, where one part of a company charges another part an inflated price for goods or services to shift profits to low-tax locations.

If Apple had to repay some taxes, the money would come as a windfall to Irish state coffers. However, fearful of losing its reputation as a business-friendly country with low corporate taxes, the Irish government is adamant that no EU rules have been breached.

The Commission said the tax deals Ireland struck with Apple in 1991 and in 2007 show "several inconsistencies" and may not comply with international taxation standards. The Brussels-based executive body also was critical of the fact that Apple's applicable tax rate appears to have been the result of "a negotiation rather than a pricing methodology" which a "prudent, independent" tax authority should not have accepted.

The Commission added documents provided by Irish authorities, including minutes of meetings with Apple's tax advisers, fail to provide a consistent explanation for the agreed tax rates. It did not publish an estimate for Apple's effective tax rate in Ireland.

Apple maintains it has not received a favorable treatment in Ireland.

"We're subject to the same tax laws as the countless other companies who do business in Ireland," the company said in an emailed statement. "Apple has received no selective treatment from Irish officials over the years."

The company added that its tax payments to Ireland increased tenfold since it launched its first iPhone in 2007. In the statement, Apple also said that on a global level, "comprehensive corporate tax reform is badly needed."

The report held up Apple as an example of legal tax avoidance made possible by the complicated U.S. tax code, estimating the firm avoided at least $3.5 billion in U.S. federal taxes in 2011 and $9 billion in 2012 by using its tax strategy.

"Apple developed its crown jewels — lucrative intellectual property — in the United States, used a tax loophole to shift the profits ... offshore to avoid paying U.S. taxes, then boosted its profits through a sweetheart deal with the Irish government," he said.

Levin added Apple's Irish tax rate "has no rational basis" because it is the result of what Ireland accepted when threatened with job losses.

The company currently employs some 4,000 people in Cork, Ireland.

Apple — one the world's most valuable and profitable firms — sat on some $164 billion in cash and cash equivalents, with $138 billion stashed away in foreign subsidiaries, according to its latest quarterly report in June. The company estimated its effective U.S. tax rate is 26.1 percent, as opposed to the statutory U.S. rate of 35 percent, primarily because of undistributed foreign earnings.

"A substantial portion" of those foreign earnings was generated by subsidiaries organized in Ireland, Apple said in the regulatory filing, adding that "such earnings are intended to be indefinitely reinvested outside the U.S."