Lawyers for American Honda Motor Co. returned to court Thursday to try to overturn a highly publicized small claims court award to a woman who sued over the fuel economy of her hybrid Honda Civic. 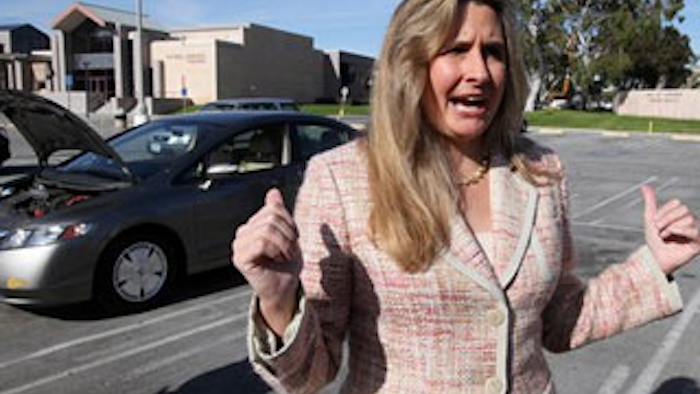 TORRANCE, California (AP) — Lawyers for American Honda Motor Co. returned to court Thursday to try to overturn a highly publicized small claims court award to a woman who sued over the fuel economy of her hybrid Honda Civic.

Superior Court Judge Dudley W. Gray II was hearing witnesses from both sides as Honda sought to reverse a court commissioner's award of $9,867 to Heather Peters, who opted out of a class-action settlement designed to give some 200,000 owners between $100 and $200 each, plus a rebate if they buy a new Honda.

Peters said she might never have brought the case if it wasn't for the puny amount offered in the class-action suit.

Her success in small claims court has led some 1,700 other hybrid owners to follow her example.

Takahashi testified she took a Honda hybrid out for a 115-mile (185.07-kilometer) test drive on freeways and streets and was able to achieve 53 to 55 mpg (23.38 kpl). She said she is a conservative driver and did not try to manipulate the car to achieve better mileage.

On cross-examination, Peters, who is a lawyer, showed photos of the dashboard of the car that was tested and pointed out that its battery was fully charged. Peters has said her battery failed early on, received a software update and never again was fully charged, leaving the car to run almost entirely on gasoline.

Peters called a former Honda analyst and technical writer, Jeffrey Holliday of Baltimore, who said he was tasked with testing Honda hybrids after repeated customer complaints about mileage. He testified he was never able to duplicate the promised 50 mpg listed in the brochure for the car.

"I'm an aggressive driver so I made an attempt to drive conservatively. It's a great car but I was not able to duplicate it," he said.

Peters' husband, Michael Cassadine, testified the car had performed well when he first met Peters in 2008, but it quickly deteriorated and a software update made it worse. He said that when they left the house Thursday the dashboard showed the car was getting 25 mpg.

Later in the day, Peters testified and presented figures she said showed Honda knew it had problems with the hybrid cars but continued to advertise them as a perfect solution to gas price problems and a way to help the environment.

She told a Honda lawyer that the situation with her car is getting worse and she now has trouble accelerating up hills.

The lawyer, Roy Brisbois, accused Peters of causing the problems by the way she drove the car. He said she previously had sportier cars and that when she bought her car to the dealer it had extreme wear on the outside of the tires.

Peters said she had been driving very conservatively.

Outside court, Peters said she had never expected to spend this much time on her small-claims action when she first went to court, but she said she's glad the entire issue is being aired.

"My purpose is to hold Honda accountable for false advertising and to raise awareness."

She said she did not expect that Honda would fight her so vigorously.

"This raises brand awareness with the public that instead of trying to make things right, they will fight consumers to the death," she said.

Brisbois declined to comment outside court, saying he would not say anything until after a decision is rendered.

The judge is expected to take the matter under submission Friday and issue a ruling later.

Peters' small-claims suit was a unique end run around the class-action process that she said offered too little to Honda owners and too much to lawyers. She urged Honda owners to take the small-claims route as she did.

Honda's appeal of the small-claims verdict is essentially a retrial. According to small-claims rules, it is the last chance for review of the case and cannot be appealed further.

Unlike the small-claims trial, Honda has legal representation, and Peters, who renewed her law license, is presenting new evidence she has discovered since she received her award. She testified in the first part of the hearing last Friday with lawyers for Honda questioning her.

A judge has valued the class-action settlement at $170 million. Attorneys for the plaintiffs have pegged the value between $87.5 million and $461.3 million, depending largely on how many people accept rebates of up to $1,500.

The judge approved more than $8 million in plaintiff attorneys' fees in his 43-page ruling.