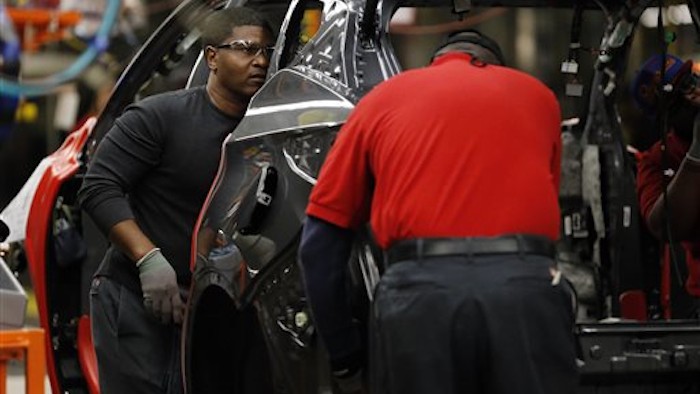 The Labor Department said Friday that the producer price index fell 0.2 percent in November, after rising by the same amount in October. In the past 12 months, producer prices have risen just 1.4 percent, the smallest yearly increase since February.

The index measures the cost of goods and services before they reach the consumer. American consumers are already seeing lower prices at the gas pump, which has left them with more money to spend on other items.

Excluding the volatile food and energy categories, core producer prices were unchanged last month and have risen 1.8 percent in the past 12 months.

That's below the Federal Reserve's target of 2 percent. The target is intended to guard against deflation, or falling prices. Deflation could pull down wages, while leaving debts unchanged, and potentially trigger another recession. At the same time, the Fed also tries to stop inflation from running so high that it could erode the buying power of consumers and businesses.

The retreat of wholesale costs gives the Fed more leeway to keep interest rates at record lows in an effort to stimulate the economy. Many economists forecast the Fed will start raising rates next June.

Inflation has already been below 2 percent for most of the past two years, and falling gas prices could drive it even lower.

The average price for a gallon of gas has fallen 30 cents in the past month to $2.62 on Thursday, according to AAA.

Benchmark U.S. crude oil fell below $60 a barrel Thursday for the first time in more than five years, suggesting gas prices could decline even further in the months ahead. Oil prices have fallen more than 40 percent since June.

Partly because of cheaper gas, the consumer price index was unchanged in October from the previous month. Compared with 12 months earlier, consumer prices were up just 1.7 percent.

Other trends are also keeping prices low. Average hourly pay has risen just 2.1 percent in the past year, below the 3.5 percent to 4 percent that is typical in a healthy economy. That makes it harder for consumers to pay higher costs, limiting retailers' pricing power.

Americans are already showing some signs of spending the savings they're seeing at the gas pump. Retail sales rose by the most in eight months in November, the government said Thursday, a promising start to the holiday shopping season.