Workers began making multiple complaints of unsafe working conditions at the Fuyao Glass America Inc. facility in Moraine not long after it opened in October 2015, leading to eight separate federal inspections and $226,937 in proposed penalties. 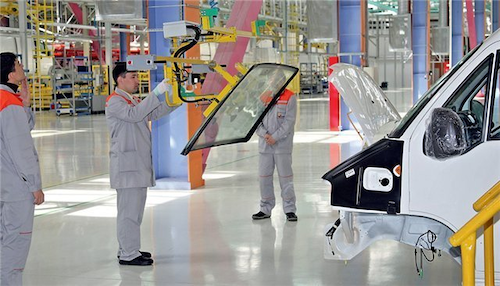 MORAINE, OH — Workers began making multiple complaints of unsafe working conditions at the Fuyao Glass America Inc. facility in Moraine not long after it opened in October 2015, leading to eight separate federal inspections and $226,937 in proposed penalties for the automotive glass supplier to plant brands such as Audi, Cadillac, Land Rover, Volvo and Volkswagen.

In its inspections at the plant, the U.S. Department of Labor’s Occupational Safety and Health Administration (OSHA) found multiple machine safety violations which expose workers to amputation and other serious injuries, as well as a lack of personal protective equipment, electrical hazards, failing to train workers about hazardous chemicals in use and unmarked exits.

In total, OSHA has cited the company for 23 serious safety violations and one other-than-serious violations.

“Fuyao Glass America needs to protect its workers. Period,” said Ken Montgomery, OSHA’s area director in Cincinnati. “Since Fuyao began operations in October 2015, we have received multiple complaints and conducted eight inspections at the facility. We found safety and health violations in six of them. OSHA will remain vigilant until this rapidly expanding company protects its workers from serious safety hazards by making needed improvements to equipment, procedures and training. Providing jobs in a community should not come at the expense of workers’ safety and health.”

Fuyao has contested all the following OSHA violations issued this year:

On Oct. 6, the agency issued four serious and one other-than-serious violation to the company for lack of personal protective equipment, failing to guard live electrical wires to prevent contact by employees, and improper use of electrical cords. OSHA proposed total penalties of $48,101 for the violations found in two separate inspections.

On July 14, the company received three serious violations of OSHA’s hazards communication standards, which govern the use of chemicals in the workplace, as a result of an April 12 inspection. The agency proposed penalties of $12,000.

On April 11, the agency issued two serious violations with proposed penalties of $14,000 for lack of machine guarding and not securing floor openings.

Under the Occupational Safety and Health Act of 1970, employers are responsible for providing safe and healthful workplaces for their employees. OSHA’s role is to ensure these conditions for America’s working men and women by setting and enforcing standards, and providing training, education and assistance.