The Oakland City Council voted unanimously to kill a plan to use a proposed marine terminal to transport Utah coal to Asia, calling such shipments public health and safety hazards. 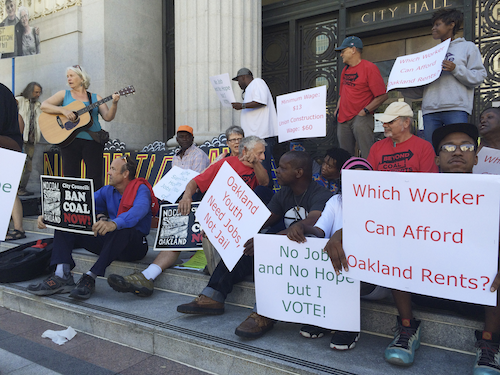 People hold up signs and demonstrate outside City Hall, Monday, June 27, 2016, in Oakland, Calif. A scheduled vote in Northern California is expected to decide whether to ban rail shipments of coal over concerns it would pose a public health or safety hazard. (AP Photo/Janie Har)

OAKLAND, Calif. (AP) — The Oakland City Council voted unanimously to kill a plan to use a proposed marine terminal to transport Utah coal to Asia, calling such shipments public health and safety hazards. Backers argued the project would bring needed jobs to an impoverished part of town.

Monday's night's vote — which prompted environmental activists still in council chambers after four hours to break into applause — approved an ordinance that bans the transport, handling and storage of coal and petroleum coke at bulk material facilities or terminals in Oakland.

"We want jobs that people can have, and have a long life and they don't have to rely upon a job of desperation," said Council President Lynette Gibson McElhaney after the vote. "I just believe that we can do better in Oakland." The ordinance requires a second vote.

City leaders have wrestled with the issue for more than a year, as detractors and supporters of the proposed marine terminal argued over the environmental dangers of bringing millions of tons of coal through the area and the economic benefits of good-paying union jobs.

The terminal is part of a larger makeover of an army base that closed in 1999, eliminating thousands of jobs. The proposed terminal is in West Oakland, a historically black neighborhood that's among the poorest and most polluted in the region. The council approved the project before the coal proposal was made.

It's uncertain whether the terminal will continue without shipping coal. A lawyer for the Oregon Bulk and Oversized Terminal on Monday sent the council a letter detailing potential legal consequences.

"Politically, no quantity of handling coal or petcoke under whatever extraordinary standard will be tolerated," said David Smith. "While that may accomplish a political outcome, it is only the first steps towards an unfortunate legal outcome."

City leaders said they were confident they could overcome a legal challenge.

More than 150 people on both sides rallied outside the building Monday before the evening meeting. They packed the council's chamber, cheering and booing as speakers testified. At times, it was so hard to hear speakers that the council president had to ask security to remove some people from the room.

Coal proponents railed at the council for what they saw as a pre-ordained vote. They argued that any environmental impact would be mitigated by transporting coal in covered rail cars that are unloaded underground.

"We agree 1,000 percent that West Oakland is polluted," said Ron Muhammad, a fourth-generation resident of West Oakland. "But the project has a plan to mitigate it, to address it, so since the public health portion is taken out of the picture, then it goes back to the jobs."

On the other side, coal opponents argued there was no way to keep coal dust from escaping into the air, and that rail shipment would worsen the health of children already disadvantaged by poverty and bad air.

"This whole notion of coal-covered cars is rather ridiculous to say the least because it's never been done before," said Derrick Muhammad of the International Longshore and Warehouse Union, which opposes the shipment of coal.

Among the speakers were residents of Utah who were furious that their state lawmakers had pumped more than $50 million in public money to build the facility, hoping to spur investment in the state's rural counties. 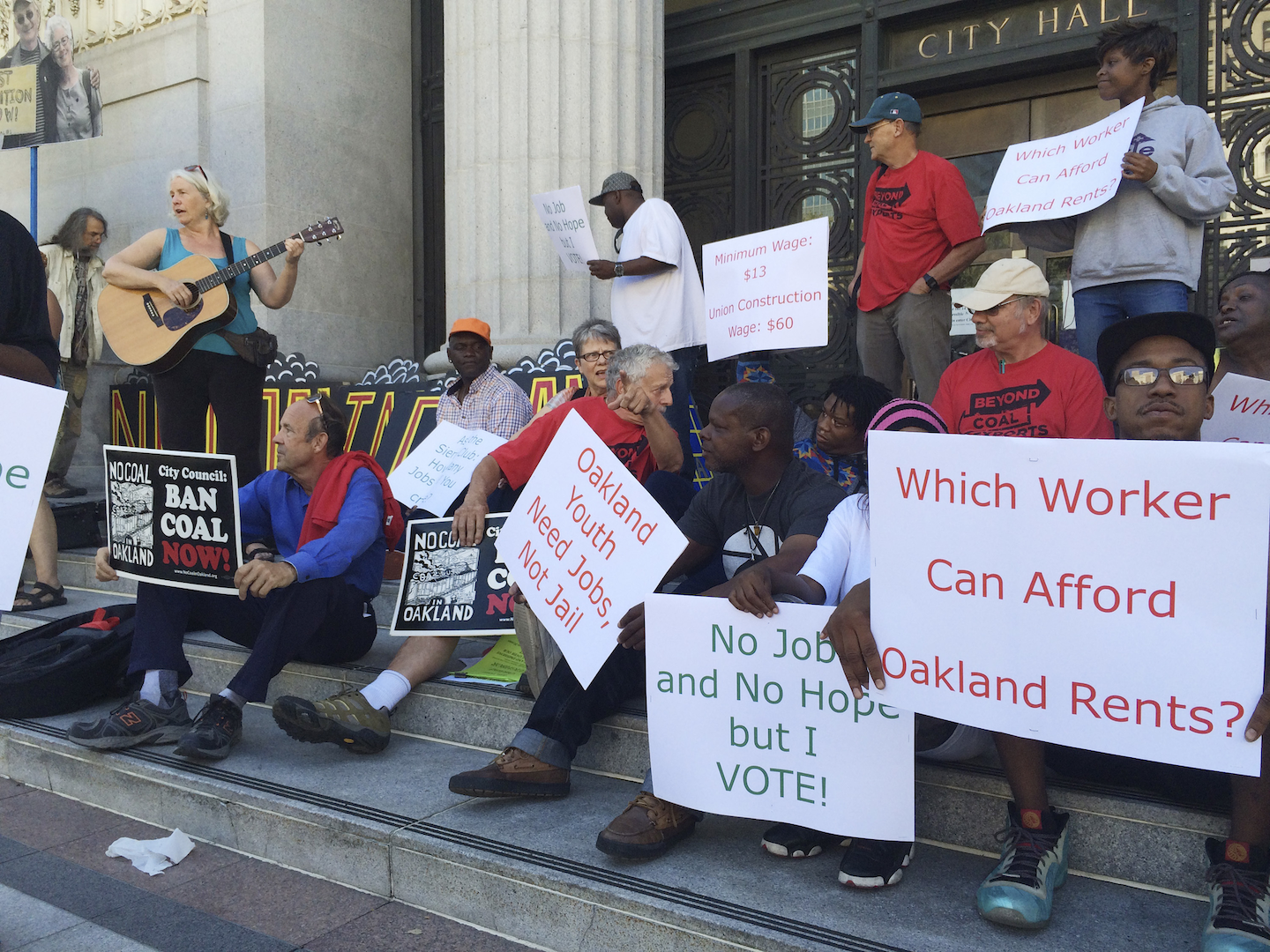 People hold up signs and demonstrate outside City Hall, Monday, June 27, 2016, in Oakland, Calif. A scheduled vote in Northern California is expected to decide whether to ban rail shipments of coal over concerns it would pose a public health or safety hazard. (AP Photo/Janie Har)
Latest in Home