Utility officials at the ruined Fukushima nuclear plant in Japan this week received the go-ahead to implement an "ice wall" to separate radioactive water from the groundwater supply. 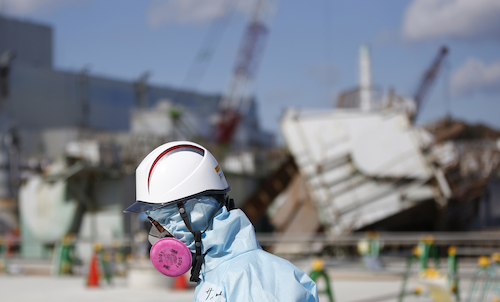 A Tokyo Electric Power Co. (TEPCO) employee, wearing a protective suit and a mask, walks in front of the No. 1 reactor building at the tsunami-crippled Fukushima Dai-ichi nuclear power plant in Okuma, Fukushima Prefecture, northeastern Japan, Wednesday, Feb. 10, 2016. In one month, Japan is marking the fifth anniversary of a devastating earthquake and tsunami that hit on March 11, 2011 and left nearly 19,000 people dead or missing, turned coastal communities into wasteland and triggered a nuclear crisis. (Toru Hanai/Pool Photo via AP)

Utility officials at the ruined Fukushima nuclear plant in Japan this week received the go-ahead to implement an "ice wall" to separate radioactive water from the groundwater supply.

Tokyo Electric Power Co. last month completed installation of a network of pipes about 100 feet underground surrounding the plant. Once turned on, the refrigerated pipes are expected to freeze the surrounding soil and prevent water from seeping through.

The Associated Press reports that the Nuclear Regulation Authority approved the project and that TEPCO officials planned to start the freezing process on Thursday.

Some, however, are skeptical of both the technology and the cost — $312 million — borne by the government. Even proponents cautioned that the system is unprecedented, and untested, at the massive scale required by the Fukushima plant.

Three reactors at the plant melted down five years ago after an earthquake-triggered tsunami knocked out its power supply and backup generators.

About 100,000 nearby residents were displaced after the disaster and decommissioning the plant will take decades under even the most optimistic projections.

The first step, however, is stopping the leaks of contaminated groundwater. TEPCO plans to implement the ice wall in phases, beginning with the portion closest to the Pacific Ocean.

Officials hope to completely contain the radioactive water in the plant by 2020, but officials still must determine how to eventually treat and release that water — nearly 800,000 tons and counting.