Officials Expect To Resolve Contaminated Water From Fukushima Meltdown By 2020

Decommissioning the plant will take decades under even the most optimistic projections, but workers are currently occupied with addressing some 760,000 tons of radioactive water. 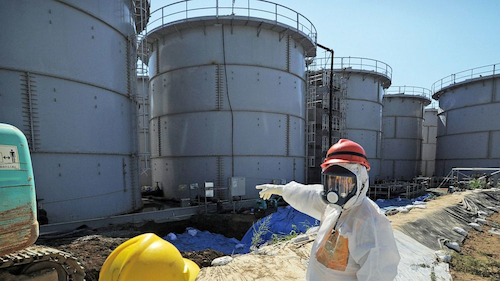 Utility officials believe that they will contain and store the massive amounts of radioactive water at the ruined Fukushima nuclear plant within five years.

Yuichi Okamura, a manager at Tokyo Electric Power Company's nuclear division, told the Associated Press this week that by 2020, workers at the plant will only process enough water to keep its reactors cool -- and could begin the arduous process of rehabilitating the facility in earnest.

"Contaminated water floating around and posing a constant risk of leaks disturbs the steady progress toward decommissioning," Okamura, who led the water cleanup through mid-2015, efforts told the AP.

Five years ago, an offshore earthquake triggered a tsunami that knocked out the power supply and backup generators at Fukushima, which led to the meltdown of three reactors in the largest nuclear disaster since Chernobyl.

Decommissioning the plant will take decades under even the most optimistic projections, but workers are currently occupied with addressing some 760,000 tons of radioactive water.

The water that has been collected over the past five years is stored in more than 1,000 tanks, while more remains collected in pools around the reactors.

Workers curbed contamination of new groundwater in recent years, as well as the amount of radioactive water leaked into the ocean. Officials soon hope to secure approval of an "ice wall" to permanently seal off the groundwater supply.

Ultimately, however, the utility will need to release treated radioactive water back into the ocean -- a step that is sure to draw considerable skepticism from the Japanese public.