Many Maine lobstermen use the shrimp season as a source of income during the winter, when lobsters are both in lower demand and harder to catch. But regulators have shut down the shrimp season for two straight years because of a collapsed shrimp population. 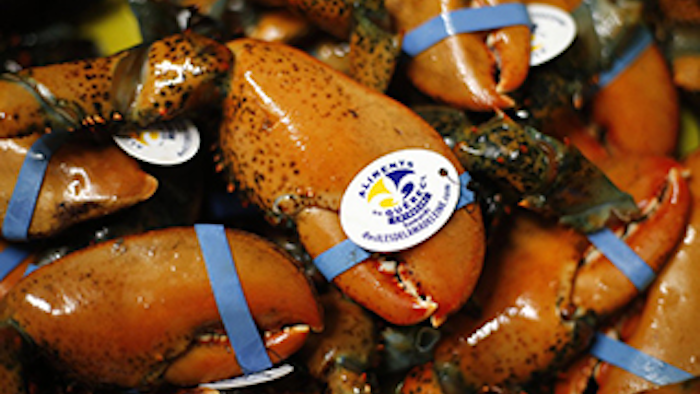 PORTLAND, Maine (AP) — Fresh-caught Maine lobster might be a little more affordable this winter because the continued shutdown of the state's shrimp season is keeping some lobstermen at sea deeper into the winter than usual.

Many Maine lobstermen use the shrimp season as a source of income during the winter, when lobsters are both in lower demand and harder to catch. But regulators have shut down the shrimp season for two straight years because of a collapsed shrimp population.

Lobster fishermen, dealers and processors said it remains to be seen if the number of lobstermen remaining in the fishery in the winter will have a big impact on the winter lobster catch. Some said a heavy supply of winter lobsters could drive price down, while others are skeptical — exchange rates, Canadian catch, and demand in Europe and Asia are among the other factors that can play big roles in determining winter prices.

For now, Port Clyde lobsterman Gerry Cushman is sticking with lobsters through the cold months, and he said many of his peers are doing the same.

"What else are they going to do?" Cushman said, speculating that winter lobstering will "drive landings up a little bit."

Maine's lobster fishery is a year-round enterprise, but it typically slows down considerably in the winter, when lobsters retreat to deeper offshore waters. January, February and March lobster catch constituted 2 to 2½ percent of annual catch in every year from 2009 to 2013, according to state data.

Lobster is also usually more expensive in the winter. Live 1 1/2 pound lobsters are averaging a price-per-pound of $6.88 at wholesale this month, compared to $5.18 in August, according to Urner Barry, a New Jersey-based publisher of commodity prices.

Downeast Lobstermen's Association Executive Director Sheila Dassatt said it's "yet to be seen" if an uptick in winter lobstering will be great enough to make a dent in prices. Spencer Fuller, a shrimp and lobster buyer for Portland-based lobster processer Cozy Harbor Seafood, said he doubts it would make a significant impact. But the fishery is a viable option for those who previously relied on shrimp to get through the winter, he said.

"It's an opportunity for them to gain some income," he said.

The Maine shrimp season typically takes place in the early part of the year. But the multistate Atlantic States Marine Fisheries Commission's Northern Shrimp Section voted in November to cancel this year's season, a year after the section closed the 2014 season for the first time in more than 30 years.

Fishermen from Maine, New Hampshire and Massachusetts fish for the shrimp, and saw dramatic declines in catch in the two years leading up to the shutdown. Regulators cited warmer ocean temperatures as a potential cause of the shrimp population loss.

About 85 percent of Maine shrimp fishermen are also lobstermen, said David Cousens, president of the Maine Lobstermen's Association and a South Thomaston lobsterman.

"There are more people lobstering and probably scalloping than there would be if there was a shrimp season," Cousens said. "A fair amount of people dedicated two months to shrimping."