Starbucks Corp. is rolling out a $1 reusable plastic cup at its cafes starting Thursday. The Seattle-based coffee chain already gives customers a dime discount each time they bring in reusable cups for refills. Now it's hoping the new cups — which bear its logo and resemble its white paper cups — will increase the habit. 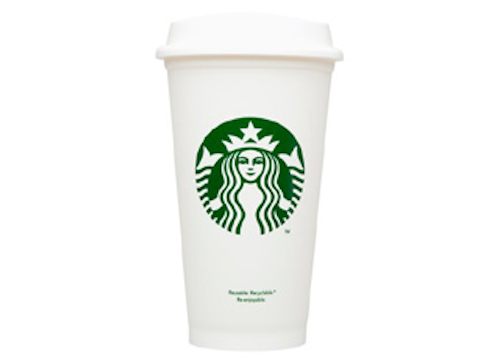 The Seattle-based coffee chain already gives customers a dime discount each time they bring in reusable cups for refills. Now it's hoping the new cups — which bear its logo and resemble its white paper cups — will increase the habit.

As with other reusable cups, the new cups will be cleaned with boiling water each time customers bring them in. The cups were tested in 600 stores in the Pacific Northwest over the past few months and will be rolled out nationwide and in Canada.

In 2008, Seattle-based Starbucks had said it wanted to serve 25 percent of all drinks in reusable cups by 2015. That goal has since been reduced to 5 percent.