Same-day grocery delivery services from Google, Instacart and Postmates are expanding into more cities around the country, delivering everything from cereal to bottled water from nearby stores. But convenience comes at a price. The delivery charges can vary greatly. 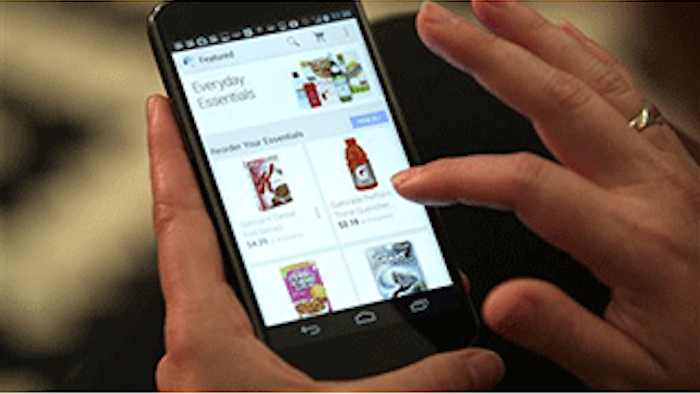 NEW YORK (AP) — If you dread making supermarket runs, you're in luck.

Same-day grocery delivery services from Google, Instacart and Postmates are expanding into more cities around the country, delivering everything from cereal to bottled water to toilet paper from nearby stores.

I tried out all three services, and they're fast, easy to use and way more convenient than waiting in the checkout line. All three deliver from local stores as well as some big national chains, such as Whole Foods, Costco and Target.

The services are different from more established grocery delivery companies such as FreshDirect, Peapod and AmazonFresh, because they don't actually sell groceries directly to you. Google Shopping Express, Instacart and Postmates merely send someone to stores in your neighborhood. It works like this: You select what you want online or on an app, choose a delivery time and the service will deliver the items to your door.

But convenience comes at a price. The delivery charges can vary greatly. Google and Instacart offer flat rates, while Postmates' fees depend on the distance of the delivery. And you may want to tip the delivery people. All three companies say it's not necessary, but Instacart and Postmates allows you to add a tip while shopping on the app or website.

Besides delivery costs, Instacart charges a premium for items from some of the stores it delivers from. That means you will end up paying a lot more than if you walked over to the shop and bought it yourself.

Another downside: getting your groceries delivered means you may be missing out on using coupons or browsing for cheaper alternatives in the store. And the orders do not always go according to plan. If an item is sold out, the delivery person will call you to figure out what to do next.

Before ordering, run an Internet search to see any coupon codes are available. I found discounts or free delivery offers for all three.

Here's how the services measured up:

Items listed on Google's service match those of the stores it works with. That's because Google shares in the profits. The biggest downside is that the company doesn't deliver meats, fish, fruits and other perishable groceries yet, even though it delivers from stores that sell them, including Target, Fairway and Costco. (You need to have a membership to order from Costco.) Google says it is working on a way to sell perishables in the future.

All the items I ordered were available in the store, and they were wrapped up nicely too. My delivery came in bags with the Google Shopping Express logo, and my two glass bottles of sparkling water were wrapped and taped in paper to prevent them from breaking.

The company goes beyond groceries to deliver TVs, pots, air conditioners and other items. I ended up turning to Google Shopping Express again to buy a last-minute Father's Day gift.

DELIVERY FEES: $4.99 for each delivery. It's currently offering six-months of free deliveries to new users. It plans to offer a membership plan for free deliveries, but hasn't come up with pricing yet.

For my first order with Instacart, I selected items from Whole Foods. I ordered clams, which I was nervous about. I like to select them myself to make sure they're not cracked or dead. But the two dozen I ordered came in perfect condition. Instacart manager Aditya Shah says the company's staff is trained to pick out the freshest fruits, vegetables and other perishable foods.

Two items I wanted were sold out. The delivery person called to see if I wanted replacements, but I missed the call. Instacart automatically took the two unavailable items off my bill.

The five items I bought from Whole Foods were the same price as in the store. But that's not always the case. When I compared Instacart's prices on items from another local supermarket, they were a lot higher than the in-store prices. Instacart charged 67 percent more for a container of cream cheese and 40 percent more for a jar of strawberry jelly. Shah says this is because Instacart has relationships with some of the shops, which enables it to price the items exactly the same. You can expect higher prices on items from stores Instacart doesn't have a relationship with. He declined to offer details about the relationships, but says the company is working to bring more stores on board.

One benefit: You can order from Costco even if you don't have a membership for the warehouse club.

This service was the most personable. After I made an order through the app, I received a picture of the delivery person and his phone number. The packaged salami I wanted was sold out. But the delivery person called and got some from the store's deli instead.

One item was wrong. I was delivered a Greek yogurt with 2 percent fat instead of the fat free one I wanted. The company says it offers refunds on case-by-case basis and that I could email customer service. I didn't bother, it was the same brand I wanted, and not that big of a deal.

The delivery person also emailed me a picture of the receipt. The yogurt and salami turned out to be cheaper in the store than the Postmates app initially estimated, and the app charged me the lower prices.

Besides groceries, the company delivers from local restaurants, drugstores and even fast food joints.

DELIVERY FEES: Start at $5 and are determined by distance. In addition, a 9 percent service fee is also charged.