McDonald’s Fights to Win Back Customers

McDonald's said Monday that an important sales figure fell again in the U.S. At a time when chains like Chipotle and smaller players like Five Guys Burgers and Fries are growing, here are a few strategies McDonald's Corp. is focusing on to try to win back customers. 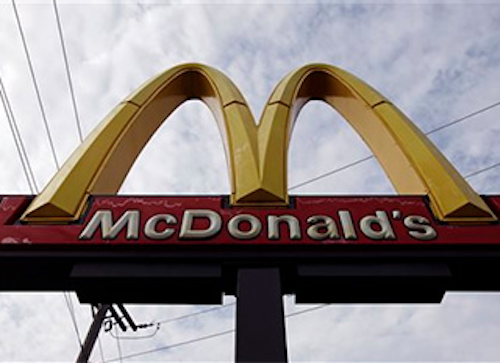 NEW YORK (AP) — McDonald's is fighting to hold onto customers amid intensifying competition.

At a time when chains like Chipotle and smaller players like Five Guys Burgers and Fries are growing, here are a few strategies McDonald's Corp. is focusing on:

People want to be able to dictate exactly what they want on their orders. It's why chains like Chipotle and Subway have done so well in recent years.

So McDonald's is trying to allow for more customization, in part by rolling out new prep tables at its more than 14,000 U.S. locations. The new tables can hold many more toppings and sauces than the old tables, signaling that McDonald's plans to offer greater variety.

The chain is also testing a "build-your-own-burger" concept in Southern California. Even if the test is successful, however, don't expect to see it at a McDonald's near you anytime soon — rolling out that kind of product across all restaurants would require considerable changes in the kitchens.

McDonald's has long dominated the breakfast hours and plans to play up favorites like the Egg McMuffin as it faces more competition as people increasingly buy breakfast on the go.

Taco Bell, for instance, is readying for its national breakfast rollout, and Starbucks recently revamped its sandwiches.

To strengthen its No. 1 position in the morning, McDonald's says it will also push the quality of its coffee in marketing. Executives note that quality coffee has become a priority for many people and that it can bring them in the door. It's one of the reasons the chain's coffee cups were recently redesigned.

McDonald's executives have conceded that they rolled out too many new items too quickly in the past year. That led to kitchen operations becoming too complicated and orders taking too long to fill.

So the chain says it will slow its pace of new offerings. It's also trying to add variety using items already on its menu. That might mean introducing McWraps and Quarter Pounders with different toppings and sauces, rather than new burgers entirely.