PepsiCo said global volume for both its snacks and drinks rose 1 percent in the second quarter. The gains were relatively modest, but the lower prices in its Frito-Lay division, along with the addition of four special flavors, has helped lift sales volume. 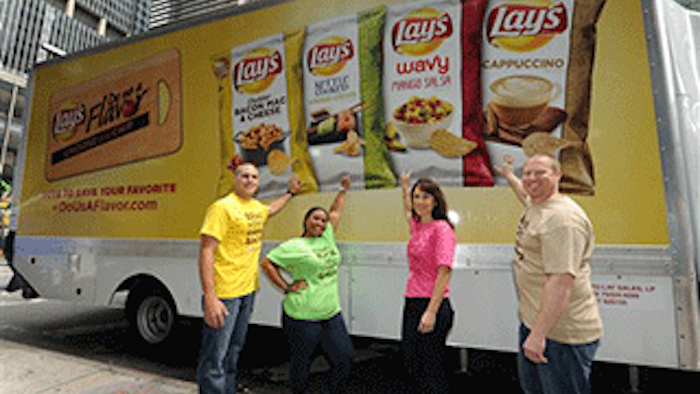 PURCHASE, N.Y. (AP) — PepsiCo raised its forecast for the year on Wednesday and said its new Lay's potato chips — including a cappuccino variety — should help boost its profit in the months ahead.

The company, which also owns Tropicana, Gatorade and Quaker, said global volume for both its snacks and drinks rose 1 percent in the second quarter. The gains were relatively modest, but PepsiCo has been driving its financial performance with a cost-cutting plan expected to generate $1 billion in savings this year.

In its Frito-Lay North America division, PepsiCo said lower prices helped lift sales volume. Although the performance was muted, Chief Financial Officer Hugh Johnston noted in a phone interview that the unit is expected to benefit in the current quarter from the rollout of special flavors — Cappuccino, Mango Salsa, Wasabi Ginger and Bacon Mac & Cheese.

The varieties were recently announced as finalists for the company's annual "Do Us a Flavor" contest, which gives customers a chance to create a new variety that is sold nationwide. The chips have so far received mixed reviews, but the contest is designed to pique curiosity and drive people to stores.

Johnston said such special flavors are also more profitable for the company, even if the prices are the same as regular flavors. That's because PepsiCo puts fewer chips in those bags.

"There might be an ounce or two less," Johnston said.

A representative for PepsiCo said regular Lay's come in 10-ounce bags and flavored Lay's come in 9.5-ounce bags. At those sizes, all bags have a suggested price of $4.29.

In its closely watched North American beverage business, soda volume fell 2 percent while non-carbonated drinks rose 1 percent. On Monday, Coca-Cola also said non-carbonated drinks rose 1 percent, while soda volume was flat. The two companies have been struggling to boost beverage volumes in the region, given the growing competition from smaller players and the shift away from soda that has been underway for years.

PepsiCo now expects core earnings per share to rise 8 percent from 2013, instead of the 7 percent increase it previously forecast.

For the quarter, the Purchase, New York-based company said net income fell to $1.98 billion, or $1.29 per share. That was down 2 percent from a year ago, as restructuring and impairment charges took their toll.

Adjusted for one-time charges, earnings were $1.32 per share, topping the $1.23 analysts expected, according to Zacks Investment Research.