Hog Farms Rebound From Virus That Killed Millions of Piglets

Thanks to warmer weather and farmers' efforts to sterilize their operations, the porcine epidemic diarrhea virus has waned. As pig numbers increase, steep prices on things like bacon should ease. 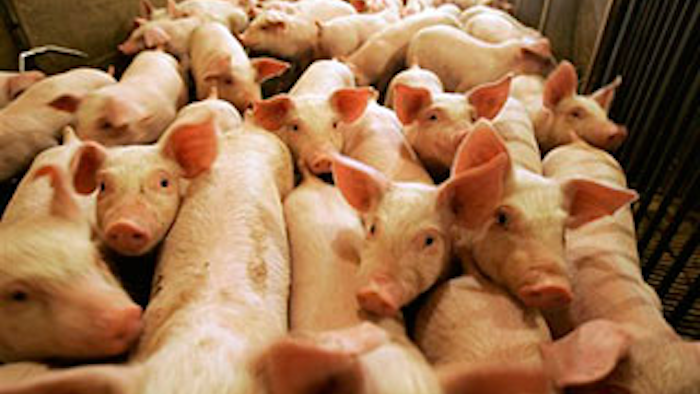 DES MOINES, Iowa (AP) — A virus that killed millions of baby pigs in the last year and led to higher pork prices has waned thanks to warmer weather and farmers' efforts to sterilize their operations. And as pigs' numbers increase, sticker shock on things like bacon should ease.

Already, hog supplies are on the rise, with 5.46 million baby pigs born between June and August in Iowa, the nation's leading producer — the highest quarterly total in 20 years and a record 10.7 surviving pigs per litter, according to a U.S. Department of Agriculture report.

It's a significant turnaround from a year ago when the porcine epidemic diarrhea virus was wiping out entire litters. Since the virus first showed up, the federal government rushed to give conditional approval for a vaccine and those in the industry began taking precautions, such as disinfecting trucks, equipment and clothing.

It's clear the industry is managing the virus, but it's far from eradicated. Two new cases were confirmed by South Dakota veterinary officials in the past week, bringing the state's total to 38 farms. And there's reason to be cautiously optimistic, Lear said, as the virus thrives in colder, wetter environments like those found in fall and winter.

As baby pigs died across the country, pork supplies dropped and prices rose, setting a monthly average retail record of $4.20 per pound the week of Aug. 14 — an 11 percent increase over the $3.76 per pound a year earlier, the USDA said.

Consumers didn't seem to be scared by the high prices, either, as demand dropped only about 3 percent in the most recent quarter compared with a year ago, the USDA said.

"We've been talking for some time about consumers starting to push back and we have seen that in certain degrees but not maybe what we had expected," said Lee Schulz, a livestock economist and assistant professor at Iowa State University. "From a pure price standpoint, it's a bit surprising that we've seen such robust demand."

This year's anticipated record-breaking corn and soybean harvests are playing a role in increased producer profits as well, because of a drop in the cost of feed.

Producers are hoping to cash in by raising more hogs. Missouri reported 40,000 more sows, Iowa added 30,000, and Texas, Colorado, Illinois, Indiana and Oklahoma each added thousands, the USDA said in a Sept. 29 report.

It takes about six months to raise a pig to market weight, so the increased supply could mean a slight drop in consumer prices this winter and a more noticeable decline in the spring, Hurt said, noting his models for profit by the end of 2015 are about $30 per animal.

Many in the industry are optimistic that the worst of the PED virus is behind them, but there is still concern among producers.

Dale Norton — a livestock farmer in Bronson, Michigan, and president of the National Pork Board — lost 1,500 piglets over 2½ weeks in March, but said his barns are now free of the virus.

There may be additional outbreaks, Norton said, but he doubts they'll be as severe, since hog farmers have learned more about the virus and how it spreads and have taken precautions.

"We know that going into the fall the risk with people hauling manure and the risk with it getting colder there's a good potential we'll have more," he said.