The millions of dollars paying for ads on ballot measures to be considered next month come from large companies and national advocacy groups. Food industry giants Monsanto, the J.M. Smucker Co., Coca-Cola and Pepsi are spending $3 million opposing an Oregon ballot measure that would require vendors to label genetically modified foods. 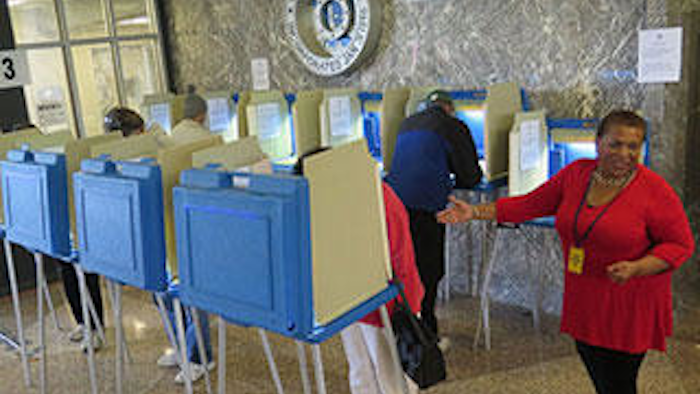 WASHINGTON (AP) — Voters may not know it, but the millions of dollars paying for ads on ballot measures they will consider next month come from large companies and national advocacy groups.

Many of the messages are tailored to defend or expand the business interests of companies such as Coca-Cola, Monsanto and ExxonMobil, yet few have their names in the ads.

For example, $6.4 million in ads funded by Coloradans for Better Schools is backed by the Rhode Island-based Twin Rivers Casino in favor of a ballot initiative that would expand gambling to horse tracks. Opponents, calling themselves Don't Turn Racetracks Into Casinos, are backed by a group of Colorado casinos and are helping fund $5.7 million in ads to defend their turf.

Through Oct. 20, TV ad spending on ballot issues totaled roughly $119 million, according to an analysis conducted by the Washington-based Center for Public Integrity, based on preliminary data from media tracking service Kantar Media/CMAG. Four of the five most expensive ballot initiatives — a process designed to give voters a direct say over public policy — feature at least one corporate patron.

Voters may not readily identify the patrons behind the hundreds of millions of dollars in ads using family farmers, concerned doctors and smiling teachers as spokespeople, as the corporations set up outside groups with nondescript names to handle the political ads.

For instance, food industry giants Monsanto, the J.M. Smucker Co., Coca-Cola and Pepsi are spending $3 million opposing an Oregon ballot measure that would require vendors to label genetically modified foods. Voters see the ad spending labeled as being from the No on 92 Coalition. Natural food companies are spending $2.1 million on ads to support the effort through a group called Vote Yes on Measure 92.

Citizens in 26 states can put on ballots proposals that would create new laws or veto existing ones. Every state but Delaware offers voters the chance to weigh in on constitutional amendments approved by the legislature. Once an initiative is approved to go before voters, the ad deluge begins.

California, home to some of the nation's most expensive media markets, has the two priciest ballot questions as measured by TV ads.

A proposition to require drug testing for doctors and allow more expensive malpractice lawsuits has drawn $23.1 million in advertising.

Consumer Watchdog, a national advocacy group, teamed up with trial lawyers to back the measure. Lawyers stand to benefit because higher judgments against doctors translate to higher attorney fees. That coalition, calling itself Yes on Prop 46, has spent $3.9 million so far on ads supporting the measure.

But the bulk of the spending opposes the measure under the No on 46 banner. Doctors and hospital and insurance companies have helped fund $19.1 million trying to stop the ballot measure.

Consumer advocates and the California Nurses Association have thrown their money behind a separate proposition that would require insurers to receive approval for rate hikes from the state insurance commissioner, an elected regulator. Ballot committees supporting the measure have aired more than $679,000 in ads so far with the label Consumer Watchdog Campaign.

But their messages have been crowded out by those of insurers and doctors, who are spending almost $20 million on ads opposing the measures through a group branded No on 45. The two California ballot questions account for almost one-third of such spending nationwide.

There are likely many more ads to come: Groups opposing the two measures together have raised more than $100 million, according to California campaign finance records.

Spending alone doesn't mean the insurance companies are heading toward victory. In 2010, a group backed by Pacific Gas & Electric Co. spent almost $14 million on ads supporting a California ballot measure that would require local voter approval for any new government-backed utilities. The electric company lost, even though its opponents did not buy any airtime.

The spending isn't limited to California. Voters are considering 158 such statewide ballot initiatives this year, down from the 184 they considered in 2010. But this year already has surpassed the $87 million spent on TV ads in 2010.

Ballot measures are a reliable way to motivate a party's base. For instance, liberal groups helped get measures to raise the minimum wage on five states' ballots this fall. Yet only Nebraska's appears to have drawn TV ads: a paltry $79,000 worth.

The Center for Public Integrity reviewed data about political advertising on national cable and broadcast television in each of the country's 210 media markets. The organization used research from Kantar Media/CMAG, which tracks political advertising and offers a widely accepted estimate of the money spent to air each spot between Jan. 1, 2013, and Monday.

The group also used data from the National Institute on Money in State Politics.

These figures only represent part of the money spent on political advertising. They do not include the money spent on ads on radio, online and direct mail, nor do the numbers reflect ads that aired on local cable systems. The estimates also do not account for the cost of making the ads.

That means the total cost of spending on political ads is likely significantly higher.