The country's number three beer brand, Budweiser, says the horses will not appear in its holiday advertising this year. A spokesman for owner Anheuser-Busch InBev was unable to say if the horses would be featured in the Super Bowl advertisements. 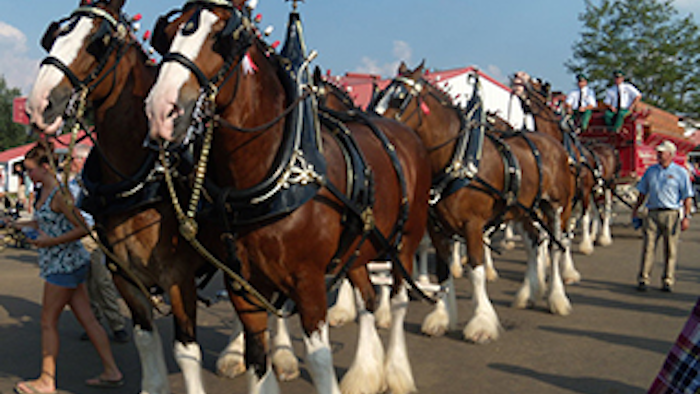 NEW YORK (AP) — Budweiser is putting its Clydesdales out to pasture for the holidays.

The country's No. 3 beer brand said the horses will not play a role in its traditional advertising for the season, although the company added later Monday that they will be featured in spots promoting responsible drinking. Anheuser-Busch InBev also said the Clydesdales will return to be part of its upcoming Super Bowl ads.

"The Clydesdales play a strong role for the brand, representing Budweiser quality and care for more than 80 years. As icons of the brand — and relevant symbols of integrity, perfection and team spirit for all generations — they are important to the brand and our campaigns," Anheuser-Busch said in a statement Monday.

The decision not to feature the Clydesdales in holiday ads was first reported by The Wall Street Journal.

The change comes as Budweiser's share of the U.S. beer market has declined since hitting its peak in 1988. According to Beer Marketer's Insights, Budweiser had 7.6 percent of the market last year, down from 14.4 percent a decade ago. The erosion has been the result of the growing popularity of light and craft beers, said Eric Shepard, executive editor of the industry tracker.

"You look around, and we have this huge group of young drinkers, almost half of them have never tried the brand," Shepard said.

Ahead of Thanksgiving, Budweiser has been running ads for its "Holiday Crates" that includes 18-packs of Budweiser bottles. The company says the crates are replicas of those that were used to deliver the beer to retailers after Prohibition. The ads feature younger people dedicating beers to their loved ones.

The Clydesdales have been associated with Budweiser since 1933, when the company introduced them to celebrate the repeal of Prohibition for beer.