Three Central California congressmen cited the region's high unemployment Thursday while asking the federal government to reopen a slaughterhouse at the center of a cruelty and food safety investigation. Republican lawmakers Devin Nunes, Kevin McCarthy and Jeff Denham signed a letter to Secretary of Agriculture Tom Vilsack saying that shutting the plant will do nothing to further the goal of responding to the alleged animal abuse. 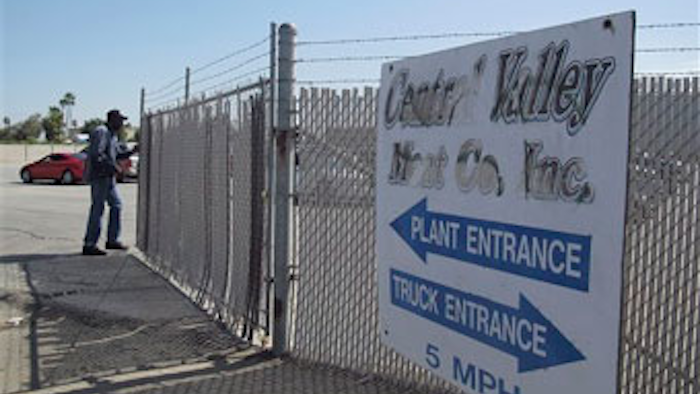 FRESNO, Calif. (AP) — Three Central California congressmen cited the region's high unemployment Thursday while asking the federal government to reopen a slaughterhouse at the center of a cruelty and food safety investigation.

Republican lawmakers Devin Nunes, Kevin McCarthy and Jeff Denham signed a letter to Secretary of Agriculture Tom Vilsack saying that shutting the plant will do nothing to further the goal of responding to the alleged animal abuse.

The trio also asked Vilsack to intervene against "attacks that are occurring at the behest of radical groups."

The USDA says the company cannot reopen until it resolves its humane handling issues.

"The company must first submit a corrective action plan detailing how they intend to comply with humane handling regulations before USDA considers allowing them to operate," spokesman Justin DeJong said.

On Monday, the U.S. Department of Agriculture suspended operations at Central Valley Meat Co. of Hanford after an undercover video shot by the animal welfare group Compassion Over Killing showed cows that appeared to be sick or lame being beaten, kicked, shot and shocked in an attempt to get them to walk to slaughter.

Federal officials say nothing they have seen so far in the video shows meat from cows that may have been sick made it into the food supply, but interviews with employees were ongoing.

It's against the law to slaughter a non-ambulatory animal for food out of concern that it could be infected with bovine spongiform encephalopathy, also known as mad cow disease.

In May, a cow that died at a nearby dairy was found to be suffering from the disease. The USDA said earlier this month it was an isolated case and didn't pose a threat to the food supply.

The video and the shutdown prompted the USDA, McDonald's Corp. and In-N-Out Burger to suspend or cancel contracts with the company.

Last year, the USDA bought 21 million pounds of beef for more than $50 million from the company owned by Lawrence and Brian Coelho.

DeJong previously said he did not know to which government food programs the beef was allocated. The meat generally goes to the national school lunch program and food distribution on Indian reservations, and is available for discount purchases by community food banks.

Slaughterhouse officials said in a written statement that they understand why companies are severing ties.

"While the USDA's Food Safety and Inspection Service says it has no indication that food safety has been compromised at our facility, we recognize that the decision by our customers is a standard business practice and understand their concerns."

The statement said the company is working with animal welfare experts to improve practices and increase monitoring, including the use of video.

A previous statement from the company said it was confident these were no food safety issues.

The letter from the congressmen noted that the USDA had inspectors on site while the video was made.

"Despite their active presence throughout the facility at the time, there is no record of non-compliance," the letter noted.

The undercover video was shot in June and July by an operative who worked at the plant and also gave a written statement to the USDA.

The video appears to show workers bungling the slaughter of cows struggling to walk and even stand. Clips show workers kicking and shocking cows to get them to stand and walk to slaughter.

Other clips show cattle with udders so swollen they are unable to keep their legs under them to walk.