Two Romanian plants believed to be the source of horsemeat mislabeled as beef in supermarkets across Europe declared it properly and any fraud was committed somewhere else down the line, officials said Monday. Romania is scrambling to contain the damage from the fast-growing horsemeat scandal — where the cheaper meat was substituted for beef in everything from burgers to frozen lasagna. 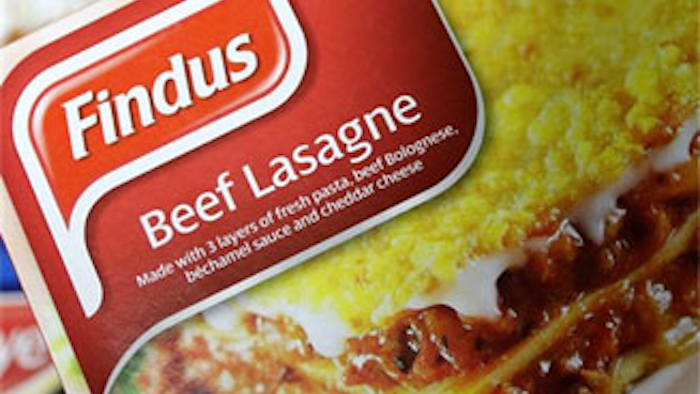 BUCHAREST, Romania (AP) — Two Romanian plants believed to be the source of horsemeat mislabeled as beef in supermarkets across Europe declared it properly and any fraud was committed somewhere else down the line, officials said Monday.

Romania is scrambling to contain the damage from the fast-growing horsemeat scandal — where the cheaper meat was substituted for beef in everything from burgers to frozen lasagna. The finger-pointing is growing by the day, involving more countries and more companies.

France says that Romanian butchers and Dutch and Cypriot traders were part of a supply chain that resulted in horsemeat being labeled as beef before it was included in frozen dinners including lasagna, moussaka and the French equivalent of Shepherd's Pie. The affair started earlier this year with worries about horsemeat in burgers in Ireland and Britain.

Horsemeat is largely taboo in Britain and some other countries, though in France it is sold in specialty butcher shops and is prized by some connoisseurs. Authorities aren't worried about health effects, but it has unsettled consumers across Europe and raised questions about producers misleading the public.

A maze of trading between meat wholesalers has made it increasingly difficult to trace the origins of food. France's agricultural minister said Monday that regulators must find a way "out of the fog."

One of the slaughterhouses implicated, Carmolimp, said in a statement its meat was properly labeled as horsemeat, adding that it had not exported beef in 2012.

It called attempts to blame it for the scandal "shameful," suggesting that only an incompetent French meat processor would mistake the horsemeat for beef.

Romania has some 25 horsemeat slaughterhouses and exports horsemeat to Cyprus, France, Poland and the Netherlands, often through middlemen, officials said.

In deeply rural Romania, horses are sold from individual households to abattoirs, and each animal has four sets of documents before its meat is exported.

Romanian authorities stopped short of confirming that the two slaughterhouses were the source of the horsemeat. But they said they checked paperwork that shows they were not improperly mislabeling meat before it was shipped out of the country to middlemen.

Prime Minister Victor Ponta said Monday there were no direct contracts between the Romanian plants and French companies and that the meat would have been mislabeled somewhere else along the line.

"We can now ask that the guilty parties are sanctioned as fast and firmly as possible," he said. "I want to help catch and punish the guilty ones... .. We are victims of this fraud."

An initial investigation by French safety authorities determined that French company Poujol bought frozen meat from a Cypriot trader. That trader had received it from a Dutch food trader, and that Dutch company had received the meat from two Romanian slaughterhouses.

Swedish officials were meeting Monday with executives from the biggest supermarket chains to get an overview of how widespread the fraud is, while in Paris top French government officials and meat producers were gathering to get a handle on the crisis, which has snared a French food processing company, Comigel.

The Dutch Food and Consumer Product Safety Authority also said Monday it was launching an investigation into the horsemeat scandal.

Re-tracing the path of the mislabeled meat will take time. Processed foods, unlike fresh, do not need to be labeled by their countries of origin in Europe. And typical frozen meals like the ones being pulled from supermarket shelves across Europe can have more than a dozen ingredients from all over.

French Agriculture Minister Stephane Le Foll said the results of the French investigation into the horsemeat fraud would be released Wednesday.

No one has reported health risks from the mislabeled meat. But clearly some company in the food chain benefited from selling the much cheaper horsemeat as beef.

"There are people who are out there to defraud, who are looking to cheat," Le Foll told RTL radio.

Sorin Minea, who heads Romania's main food producers' association, claimed Monday in an interview that international gangs had perpetrated the fraud. "There is an international ring that does this... the documents (relating to the meat) are changed abroad," he said.

An expert would know the difference between horsemeat and beef and would be unlikely to mislabel it by accident.

"If the buyer is suspicious they have to check it at the source," he said.

Michel Barnier, a former French agricultural minister who now works at the European Union level, said it was not an issue of food safety but of justice.

"Consumers have the right to the truth, quality, and transparence. We have to do more in tracking," he told Europe 1 radio.

He said the company's deal with Comigel stipulates that the beef in the frozen lasagna should come from Germany, France or Austria, but that has not been the case.

Associated Press writer Lori Hinnant in Paris, Mike Corder in the Hague, Netherlands and Karl Ritter in Stockholm contributed to this report.