Packing more antioxidants than the "superfoods" blueberries and acai berries, Aronia berries are making its foothold in the US market. New to consumers, they're native to North America, but are only recently showing up in everything from juices to baby food. 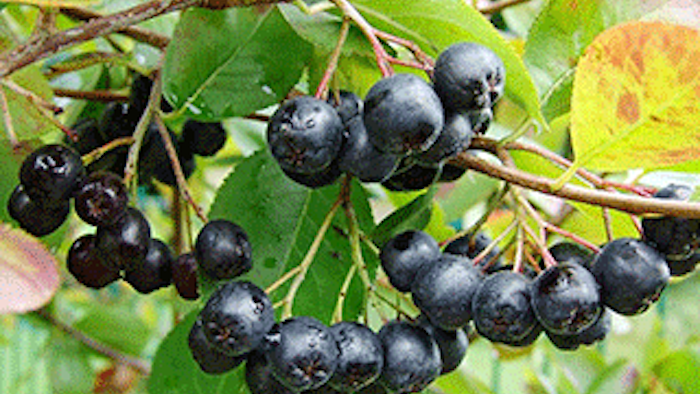 MISSOURI VALLEY, Iowa (AP) — A new fruit that research says packs more antioxidants than popular "superfoods" like blueberries, acai berries and goji berries is establishing itself in the aisles of mainstream grocery stores, showing up in everything from juices to powdered supplements to baby food.

Its rise from being a novelty item at farmers markets into a multimillion-dollar U.S. industry even includes a name change, from the common chokeberry — so named centuries ago by European settlers who found the tart, astringent berry more pretty than palatable — to the aronia berry, derived from its genus, Aronia melanocarpa.

The native North American berry was introduced in Russia and eastern Europe in the early 20th century and has been cultivated there for juices and wines. Now, farmers throughout the upper Midwest are planting the shrubs by the thousands every year. But the industry's roots in the U.S. can be traced to Sawmill Hollow Family Farm in the Loess Hills of western Iowa, where most in the industry believe the first bushes were planted for commercial cultivation in the U.S.

Andrew Pittz, 28, is the driving force behind the aronia berry's emergence. His family was looking for a crop they could cultivate on the hilly, silt-heavy soil near the Missouri River, and in 1997, Pittz's parents planted some 200 bushes. The bush grows well in the Midwest, has few pests and doesn't have to be replanted every year.

The Pittz family was successful: Sawmill Hollow products now are sold in about half of Hy-Vee's 237 stores, and in all of Whole Foods' 45 Midwest-region stores, according to spokeswomen for the chains. Rather than keep the berry and its economic potential under wraps, Pittz and his family have been spreading word far and wide — especially throughout Iowa.

The farm holds an annual field day that draws thousands in September, and Pittz planted bushes in all 99 Iowa counties last year. Even Iowa State University is helping promote the berry as a value-added crop and a good way to diversify farm income, offering grants to help people get started.

"We want the aronia berry to be to Iowa's Heartland what the peach is to Georgia." Pittz said.

His family also has taught others how to plant, grow and market the almost black-purple, pea-sized berries. They even share best practices for pruning the bushes for maximum yield, which they developed over nearly 18 years of trial and error. A mature bush at four to five years can produce up to 20 pounds.

Consumers are taking notice of the potential health benefits, said Stacey Loftus, Hy-Vee's health and wellness supervisor. Research published last year in the Journal of Agriculture and Food Chemistry says aronia's oxygen radical absorbance capacity — a standard measurement of antioxidant strength — shows the berry has one of the highest values ever recorded for a fruit.

"I don't think this is a passing fad," she said.

Antioxidants help protect cells from damage, although there are questions in the medical field as to what role antioxidants play in helping prevent human disease. Federal regulators have, in recent years, targeted companies that have made unsubstantiated health claims about antioxidant-containing products. Last year, the Federal Trade Commission upheld a judge's decision that POM Wonderful made deceptive claims that its pomegranate products could treat or prevent heart disease, prostate cancer and other illnesses. The FTC's action is pending in the U.S. Court of Appeals for the D.C. Circuit.

More than 440 new products containing aronia — mostly in juices, wines and other drinks — have been introduced worldwide in the last five years; about 60 of those are in the United States, according to the 2013 University of Nebraska-Lincoln Food Processing Center's Product Traffic Report, supported by the U.S. Agriculture Department to track new food products.

Aside from Sawmill Hollow products, widely distributed mainstream brands have jumped on board, such as Old Orchard juices and Beechnut baby foods, which introduced an apple and aronia berries puree this year.

The first aronia cooperative — the North America Aronia Cooperative, based in Omaha, Nebraska — was formed earlier this year with members from 10 Midwestern and Great Plains states. Group president Colleen Nipp says the co-op is capable of producing up to 20 million pounds of fruit a year and estimates the current economic impact is about $85 million, "which includes plant sales, berry sales, processing charges, harvesting equipment, growing supplies, irrigation equipment and the sale of finished aronia products."

But with the industry is in its infancy, it's difficult to provide overall yearly production numbers or even a common price per pound. Midwest Aronia Association president Melissa Ehrman Johnson says her group, which has members in 12 states and Ontario, Canada, has farmers fetching anywhere from 50 cents per pound to $7.50 a pound.

Johnson and her husband got into business in 2009, planting about 300 bushes on their 10-acre homestead in southwest Iowa farm. The venture has already proved to be profitable, she said, as she's hoping to move from on-site sales to commercial marketing this year.

There is much to be learned, Johnson says, from another industry that has seen enormous success with its own bitter berry: the cranberry industry.

"We actually have a gentleman who's on the Cranberry Association who has worked with us from the early get-go to help us out with ideas along the way, particularly with processing ... and recipe and product development," she said.