It seems these days, grocery shelves are exploding with gluten-free choices. All gluten-free food segments increased in the past year, though the snacks segment increased the most. Gluten-free snacks increased 163 percent from 2012 to 2014. 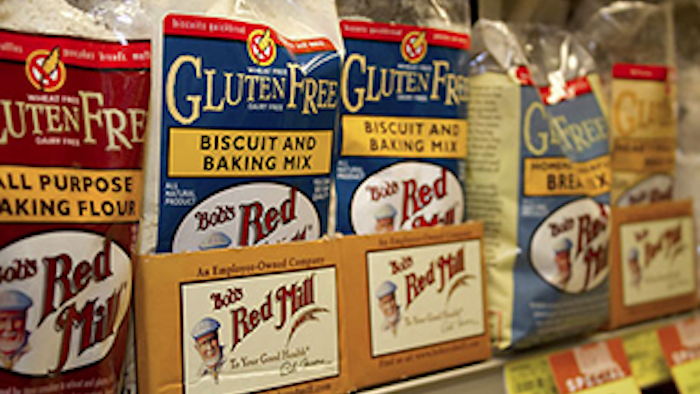 CHICAGO (PRNewswire) — It seems these days, grocery shelves are exploding with gluten-free choices, due in large part to greater awareness of a gluten-free diet as a result of increasing diagnoses of celiac disease and other gluten sensitivities, and the diet's perceived health benefits. So it's no surprise that recent Mintel research finds the gluten-free food market is estimated to reach sales of $8.8 billion in 2014, representing an increase of 63 percent from 2012-14.

"Overall, the gluten-free food market continues to thrive off those who must maintain a gluten-free diet for medical reasons, as well as those who perceive gluten-free foods to be healthier or more natural," says Amanda Topper, food analyst at Mintel. "The category will continue to grow in the near term, especially as FDA regulations make it easier for consumers to purchase gluten-free products and trust the manufacturers who make them. Despite strong growth over the last few years, there is still innovation opportunity, especially in food segments that typically contain gluten."

All gluten-free food segments increased in the past year, though the snacks segment increased the most. Gluten-free snacks increased 163 percent from 2012-14, reaching sales of $2.8 billion. Sales increases were mainly due to a 456 percent increase in potato chip sales. Meanwhile, the meats/meat alternatives segment is the second-largest gluten-free food segment in terms of sales, reaching $1.6 billion in 2014, a 14 percent increase from 2012-14. What's more, the bread products and cereals segment saw gains of 43 percent during that same time period, and is set to reach $1.3 billion this year. Bread and cereal are ripe for gluten-free growth with only 1 percent of the overall segment termed gluten-free.

"Gluten-free products appeal to a wide audience; 41 percent of US adults agree they are beneficial for everyone, not only those with a gluten allergy, intolerance, or sensitivity. In response, food manufacturers offering either gluten-free alternatives or existing products with a gluten-free label have increased dramatically over the last several years," adds Amanda.

The next defensive tool is on the baseball diamond.
Jul 16th, 2021
Follow Us
Most Recent