Hoffman's Quality Meats has increased its business and employment since it was purchased in 2011 by a family partnership headed by two young entrepreneurs who wanted to find, nurture and grow longtime businesses like Hoffman's. 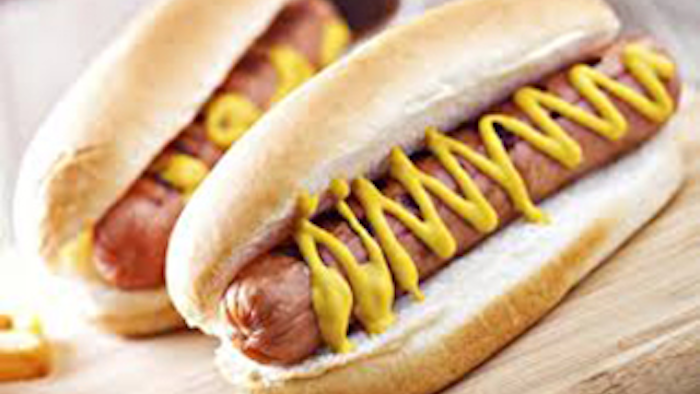 HAGERSTOWN, Md. (AP) — If you're at a big entertainment arena around Washington, D.C., or Baltimore and order a sausage, hot dog or hamburger, chances are good you'll be chowing down on a Hoffman's.

Hoffman's Quality Meats, a 91-year-old meat processing company near Hagerstown, has increased its business and employment a lot since it was purchased in 2011 by a family partnership headed by two young entrepreneurs who wanted to find, nurture and grow longtime businesses like Hoffman's.

"We have a strong passion for manufacturing. We hate to see agriculture go away," said Jason Trippett, who is a partner with his brother, Mike, and their father, Michael, in owning Hoffman's processing plant, country foods market and storage unit business at 13225 Cearfoss Pike, just west of Hagerstown.

Hoffman's makes "difficult-to-find" cooked natural and organic meat products, right at a time when consumers are increasingly concerned "about where their food is coming from," Jason Trippett, 38, said last month.

"If you buy your hot dogs anywhere else, they're full of mega fillers . like potatoes. We don't use any of that," Mike Trippett said. "It's literally like in the old movies, where you see the string of hot dogs hanging.

"It takes more time, but in the end, you're getting good quality. And, what's really paying dividends are people that are getting excited about their food in (Washington) D.C. and other parts of the world," he said.

Since buying Hoffman's, Mike Trippett said, the company has begun two work shifts, rather than one, and employment has risen from a number "in the mid-20s," to 47 now — including some former part timers whose hours have been increased to full time.

And, "we've just about doubled our overall (gross) revenue coming into the business," Mike Trippett said.

"We've been working hard," he said. In addition to sales at several grocery chains, the customer base has expanded to include "the majority of the concession stands at the Verizon Center," a sports and entertainment arena in Washington, he said.

A larger operation than Hoffman's, Treuth, which was founded more than 100 years ago, sells beef in the Northeast and Mid-Atlantic regions, and is believed to be the largest distributor of kosher meat on the East Coast, according to the company's website.

For the brothers, both of whom were raised in Maryland's Anne Arundel County, the purchase of Hoffman's marked the first time they've gone into business together.

Founded by Roy Hoffman in 1923, the meat processing business eventually included Roy's sons, Jacob and Robert, and later, Robert's son, Donald Hoffman. He was president of the company from the late 1970s until it was sold to the Trippetts in February 2011.

"We both have different talents, I guess you could say," Mike Trippett said.

While Mike was in the mortgage industry for 17 years, he had a lot of experience in sales, which complimented the experience Jason had in finance, working for a company based in London, England, the brothers said.

The English company worked as a consulting firm for larger Fortune 500 businesses, "with the idea of taking a non-performing business and making it perform, or taking a company that was performing and making it perform better," Jason Trippett said. As part of such work, he said, he had experience working with some of America's largest meat processors.

So, when the brothers thought of going into business together, "it just made sense for us to have something to do with manufacturing, and Michael could sell — and we ended up here together," Jason Trippett said of Hoffman's.

The local meat processor was doing well, but the brothers thought it could grow even more, Mike Trippett said.

"Don (Hoffman) had always done things in a very nice way. Quality was always No. 1," Mike Trippett said. "He always did things in a small or regional perspective."

When they saw Hoffman's was for sale, the Trippetts thought, "How could we expand on this?" Mike Trippett said. "The main business is sausage. How do we make a go of it?"

After buying the business, he said, "we really concentrated in the first two years, doing everything Don had done, but more of it. In the last two years, we started to expand our product line.

"For example, in (a local grocery chain) now, you can find a variety of our hot dogs, (and) our pulled pork — which is a very unique flavor. And, with our bacon, we've concentrated on the all-natural varieties. We stay away from (preservatives like) sodium nitrates," Mike Trippett said.

Hoffman's aim is to try to restrict its ingredients, listed on its labels, to those "that a 5-year-old can read," he said. "We use all-natural preservatives."

Then, "we started hitting the concert venues," making sales pitches to increase the business, Mike Trippett said. "Started off with one group wanting us, and somebody else saying, 'How do we get this over here?' We also have been providing the (Hagerstown) Suns with their hot dogs."

Now, with two shifts going at the plant since early this year, the work is much more extensive and the daily shipments go farther.

"When we first started, we processed six to seven animals a week normally," Jason Trippett said. "We process now over 100 animals a week."

And, he said, "a large amount of those animals — hogs, cows, goats, lambs — are coming from" the Tri-State area, that includes Berkeley, Jefferson and Morgan counties in West Virginia, Washington County in Maryland, and Franklin and Fulton counties in Pennsylvania.

When the Trippetts bought Hoffman's, its sales revenue, before expenses, was "approximately, maybe even a little bit less than, $5 million a year," Mike Trippett said.

With the business growing, "we moved that to 10" million dollars in gross sales this past year, he said, emphasizing that such numbers are offset by the money that's been spent on the operations.

The Trippetts declined to say how much they paid to buy Hoffman's.

Asked how much money they've spent on improvements and other capital expenses since the purchase, "a lot," was all that Mike Trippett would disclose. "We've added trucks. We've added new processing equipment. We've added updates to our (animal) pen area. We've added a lot," he said.

In all, this has created "a lot of debt along the way," Mike Trippett said, "but it's also a lot of common sense decisions. It's a lot of understanding where we can cut back, but where we can move forward.

"My brother has done a great deal with the process. I've come up with a lot of the new lines (of products), like the natural side," he said.

"We're the only organic meat processor in the state of Maryland. Organic is a very specialized segment of the meat business, so the farms that the animals come from have to be certified organic. ... The animals have to be fed with organic food, no chemicals of any sort. When they are here, they are not — absolutely not — treated with any chemicals," Mike Trippett said.

In selling all its meat products, Hoffman's does compete with other processors, "but if you look around, what we are competing against is usually frozen food," he said.

"When it comes to our sausage, it's always made fresh. Whatever we ship out to the stores, we make it fresh," he said. "What we make in the morning, they get that same day."

As always in the world of agriculture, business decisions are complicated by weather conditions around the globe. So, too, it has been challenging for the Trippetts as the prices for various kinds of animals have fluctuated swiftly in recent years, Mike Trippett said.

"We're in a rapidly changing environment of increasing prices of beef and pork right now," he said. "We suffered a heavy drought in the Midwest over the last few years, (so) when the grain costs were through the roof, a lot of farmers eliminated their cow-calf herds. They created a real shortage for years to come.

"So now, while we've got over the drought situation, we've seen some of the best grain prices — cheap, that is," he said, noting that has caused farmers to keep more of their heifers, which affects businesses like Hoffman's. "It's a balancing act," he said.

Overall though, the brothers said, the biggest focus for them is on their employees.

"We're very careful in making sure we reinvest so that we can keep growing. The investment in more people — that's probably our greatest achievement," Mike Trippett said. "For every person we hire, we figure we've touched at least two other people," given that the average family might have three members.

The brothers are also proud that in buying a third-generation business that had no family members interested in continuing it, they have kept the eight-acre Hoffman's site from possibly going to developers, Mike Trippett said.

"We look at it that it was a good opportunity for us. We hope the community looks at it as a win because, instead of developing the land, it's staying an agricultural part of the community," he said.

Former Hoffman's president Donald Hoffman, who is 72, said last month it was tough deciding to sell the business.

Over the years, he said, he had expanded it, adding the retail store, a catering business and the storage unit business. "I had a very loyal workforce. The average tenure was around 20 to 21 years, and that's counting the people who had been with me longer and the people that were new," he said.

"I loved what I did," he said. But selling it "was the smarter thing to do" because he was the last Hoffman in the business, with no one in the family wanting to take it over.

Shortly after the sale, Hoffman said he and a brother, John Hoffman, who is a farmer and owns Hoffman's Trucking, bought a former restaurant building north of Hagerstown at an auction for about $325,000 and spent "more than $250,000 more redoing everything inside and out."

Their new restaurant, Hoffman's All American Grill, opened about two months ago at 18203 Mason-Dixon Road, which is just off Exit 1 from Interstate 81 as it enters Pennsylvania. The restaurant, which has 33 employees, features casual dining, can seat as many as 160 to 175 people, and is open for lunch and dinner from Mondays through Saturdays.

In selling the Hoffman's Quality Meats business, Donald Hoffman said he kept the Hoffman's Catering business and that is now operating out of his new restaurant.

Hoffman said he also still owns Brook Meadow, the long-time meat processing business and store he bought about 12 years ago because it "fit in with Hoffman's at the time and (the owners then) were getting ready to close" Brook Meadow.

He said Brook Meadow, which is located at 716 Security Road in Hagerstown, is a "very viable business" and is doing well. The business, which employs five people, "doesn't have as broad a (product) line" as Hoffman's does, "but we still make everything there."