The nation's leanest state is taking aim at junk food in school cafeterias as it considers the nation's toughest school trans-fat ban. A Colorado House committee was scheduled to hear a bill Thursday to forbid any trans-fat in school food — not just the food served through regular cafeteria lunches. 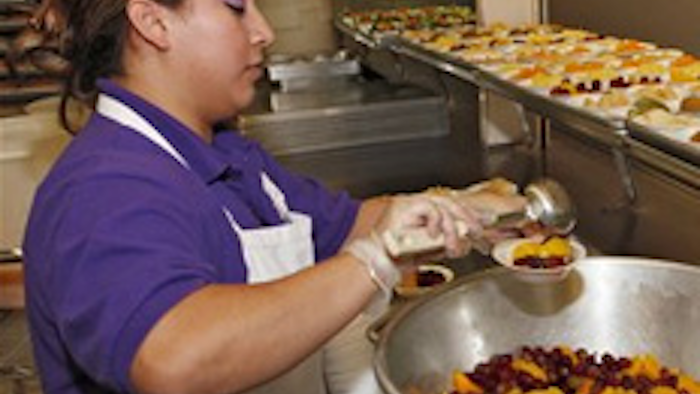 A Colorado House committee was scheduled to hear a bill Thursday to forbid any trans-fat in school food — not just the food served through regular cafeteria lunches.

That would mean vending machines, after-school bake sales and popular "a la carte" items on lunch lines such as ice creams or pizza would have to be produced without artery-clogging trans fats.

Several states already limit trans-fat in school cafeterias, but none has a trans-fat ban that extends before and after school. Delaware and California, for example, both ban school food with trans-fat, but not at all after-school activities.

Colorado has the nation's lowest obesity rate, but young people are becoming fatter along with their counterparts in other states. In 2007, Colorado's childhood obesity rate was the nation's third-best. By 2010 it ranked 23rd according to the Colorado Health Foundation, a change researchers attribute to sedentary behavior and a growing childhood poverty rate.

Lawmakers who sponsored the trans-fat ban — a Republican and a Democrat — said Colorado needs to step up healthy eating among children to hang onto its prized leanest-state title.

"Colorado is one of the healthiest states but has the one of the highest rates of childhood obesity. So if we're going to do something about that, this is a step in the right direction," said one of the bill's sponsors, House Education Chairman Tom Massey, R-Poncha Springs.

The American Heart Association is working to assure skeptical Colorado lawmakers that the trans-fat ban wouldn't forbid childhood faves such as pizza and French fries. The bill also wouldn't affect naturally occurring trans-fat, such as that in beef and dairy.

"You can still have the exact same food. You'd have to find different ways of preparing them," association lobbyist Susanna Morris said.

Colorado's Department of Education says it doesn't have a statewide trans-fat standard. A spokeswoman for the state education department, Janelle Asmus, said a department review "found the amount of trans-fat in a school meal to be minimal" but added that the review didn't include items for sale in vending machines and after-school activities such as bake sales.

The Legislature has not estimated how much the change would cost local schools. Supporters insist that schools could serve the same foods, just switch to trans-fat-free shortening and oils. The bill would require no changes to school kitchens or how food is prepared.

Colorado's best-known school nutritionist says the complete trans-fat ban is do-able. Ann Cooper, author of the "Renegade Lunch Lady" blog, is in charge of food service at the Boulder Valley district, thought to be the only public school district in the state that is trans-fat free.

If approved, Colorado's trans-fat ban would take effect next school year. Supporters say the proposal may be amended to give schools more time to comply, a change they accept. The bill may also be amended to exempt fundraisers from the ban, protecting many sporting-event concessions such as nachos.