Fast-food protests are planned for about 30 U.S. cities Tuesday, as labor organizers look to draw attention to practices they say illegally deprive workers of their wages. The protests are part of an ongoing campaign to build support for pay of $15 an hour. 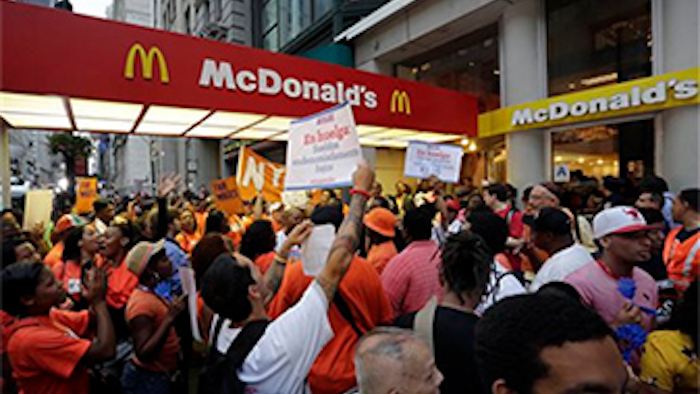 The protests are planned for about 30 cities, but it's not clear what the scope of the turnout will be. It's part of an ongoing campaign by labor groups to build support for pay of $15 an hour and bring attention to the rights of low-wage workers.

Organizers have also been referring workers to attorneys, who filed lawsuits in three states last week saying McDonald's was stealing their wages in a variety of ways, such as by docking paychecks for the cost of their uniforms.

McDonald's Corp. said it planned to investigate the allegations and take necessary actions. A representative for the company, based in Oak Brook, Ill., did not immediately respond to a request for comment on the planned protests.

The protests by labor groups since late 2012 have captured national media attention and served as an important backdrop for President Obama's push to lift workers' wages. The White House wants to raise the federal minimum wage to $10.10 an hour, or about $21,000 a year for full-time work. That's up from the current pay of $7.25 an hour, or $15,000 a year, which was last raised in 2009.

Protest organizers are getting financial and organizational support from the Service Employees International Union, as well backing from local Democratic lawmakers and community leaders. In New York City, public advocate Tish James and others were expected to turn out Tuesday for a rally at a McDonald's near the Empire State Building.

"The lawsuits that were filed last week put McDonald's on notice that fast food workers are aware that they're getting their money stolen," said Kendall Fells, who works for the Service Employees International Union but said he was "on loan" to the campaign for higher wages.

Fells said the actions would target McDonald's restaurants, although fast-food workers from across the industry would participate.

The lawsuits filed in California, Michigan and New York against McDonald's detail a variety of "wage theft" allegations. In Michigan, for example, workers said they were made to wait before clocking in for their shifts so restaurants could maintain a target ratio of labor costs as a percentage of revenue. The suit describes a detailed monitoring system by McDonald's Corp. that closely tracks such metrics at its more than 14,000 restaurants in the U.S.

While such practices are widespread across the industry, lawyers said they targeted McDonald's because of its size and position as an industry leader.

Turnout for past fast-food protests has varied greatly. In major cities, for example, TV crews and other media are alerted of a time and location the day before a large rally is planned. The crowd will then flood the restaurant, with workers and others speaking before dispersing or moving to another location after about a half hour.

Elsewhere, the turnout has been much smaller and had little to no impact on operations.

For Tuesday, organizers said protests were scheduled in about 30 cities including Detroit; Memphis, Tenn.; Milwaukee; and Oakland and Sacramento, Calif. They noted that the number of cities could rise.

Brendan Brosh, a spokesman for James' office, said the New York City public advocate plans to propose legislation that would establish a hotline where workers could anonymously report actions that amount to wage theft. The legislation would also give city agencies expanded authorities to investigate wage theft, he said.

Brosh said James will also call on McDonald's Corp. to amend its franchise agreements to "punish franchisees that engage in wage theft."