US, Canada Take $17.5B Hit From One-Year Russia Food Ban

Many U.S. food companies that sell to Russia have already set up some operations there. A spokeswoman for Mondelez International, Inc., which makes Oreos, Chips Ahoy cookies and Ritz crackers, said the company uses local suppliers and local production facilities. 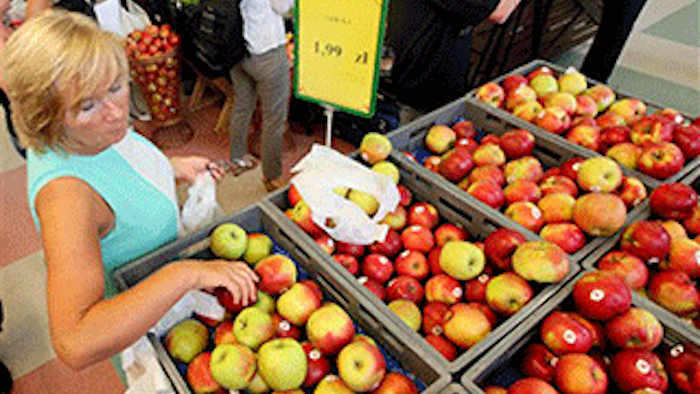 WASHINGTON (AP) — Russian diners won't be able to find creamy Dutch cheeses or juicy Polish apples in the grocery store or cook up chicken from the United States — the result of a Russian ban on most foodimports from the West.

Although the U.S., Canada and the European Union together will take more than a $17.5 billion hit from the one-year ban, Russian consumers may feel it more than Western farmers.

Jason Furman, the chairman of the White House Council of Economic Advisers, shrugged off the import ban's impact as negligible, in contrast to Western sanctions on Russian individuals, businesses and economic sectors that he said have sent investors fleeing Russia and made a weak Russian economy even weaker.

There's a "cruel irony" in Russia's import ban, said David Cohen, the Treasury Department undersecretary in charge of economic sanctions. "What the Russians have done here is limit the Russian people's access tofood," Cohen told reporters. "We don't do that. Our law doesn't allow us to do that."

What to know about the Russian ban, which is in retaliation for sanctions the U.S. and European nations have imposed because of its actions in Ukraine:

WHO IS HIT THE HARDEST?

In the EU, Poland, France, the Netherlands and Germany will feel much of the loss.

Russia's ban on Polish apples, already announced last week, led to a popular campaign in Poland, with media and officials urging citizens to eat more apples and drink more ciders. A widely used slogan was "An apple a day keeps Putin away!"

"Russia is a significant market for us and one that grows by about 10 percent each year. It's not trivial," he told European television network LCI.

The chairman of the Dutch Federation of Agriculture and Horticulture, Albert Jan Maat, warned the Russian ban will cause prices to drop across Europe because of oversupply and called on the Dutch government and the EU to help farmers.

The impact is less in the United States. The largest U.S. export to Russia is poultry, mainly chicken, followed by tree nuts such as almonds, and also soybeans. In a statement, the National Chicken Council and the USA Poultry and Egg Export Council said Russia buys a little more than $300 million in U.S. chicken annually, about 7 percent of the industry's total exports. The chicken groups said they did not expect the ban to have a major impact on the industry.

Both the EU and the United States have already seen hits to Russian exports in recent years as Russia has scrutinized and limited meat imports. In 2012, Russia bought almost $300 million in U.S. beef and $268 million in U.S. pork. Those numbers dropped to $1 million and $17 million, respectively, a year later after Russia imposed limits on those products because of a feed additive used in the United States called ractopamine.

Other countries have had similar issues with Russia — the amount of pork meat exported from Germany to Russia from January to May 2013 was 83,000 tons, but fell to 9,000 tons a year later amid sanitary import restrictions, according to Germany's farmer lobby group DBV.

The biggest impact could be on Russian consumers. Russia received up to 55 percent of its agricultural imports from the countries it has so far sanctioned, including the United States, European Union, Ukraine, Australia and Canada, according to an Associated Press analysis of figures from the U.N. Food and Agriculture Organization.

Almost half of Russia's meat imports — about 47 percent — last year came from the countries it has slapped sanctions on, according to the FAO figures. Russia will likely import more from its other main suppliers, namely Brazil and Paraguay.

About 95 percent of Russia's dairy imports last year came from countries it has now sanctioned, with its biggest suppliers until now being Ukraine, the Netherlands, Germany, Lithuania, Finland and Poland.

Alexis Rodzianko, president of the American Chamber of Commerce in Russia, played down the effects of the import bans on Russian food supplies. "The price will go up and the selection will go down, but basically I think Russia can feed itself now," Rodzianko said.

WHAT FARMERS, COMPANIES ARE SAYING

Many U.S. food companies that sell to Russia have already set up some operations there. A spokeswoman for Mondelez International, Inc., which makes Oreos, Chips Ahoy cookies and Ritz crackers, said the company uses local suppliers and local production facilities.

Worth Sparkman, a spokesman for Springdale, Arkansas, based Tyson Foods— one of the world's largest processors of chicken, beef and pork— said the chicken the company ships to Russia will be absorbed by the 130 other markets the company sells to.

Mike Cockrell of Laurel, Mississippi, based Sanderson Farms, Inc., said Russia is not as big a market as it once was. But still, "an 87.5 million-pound customer is a good customer, and we'll have to replace that," he said.