According to the industry group National Turkey Federation, more than 46 million of the big birds will be served as Thanksgiving dinner this year. Just a few hundred will get to experience the holiday as a pet, said turkey rescue Farm Sanctuary. 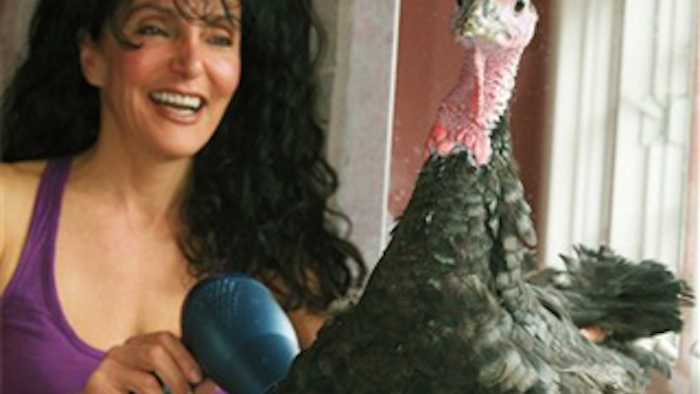 OK, so it isn't even close. According to the industry group National Turkey Federation, more than 46 million of the big birds will be served as Thanksgiving dinner this year. Just a few hundred will get to experience the holiday as a pet, said turkey rescue Farm Sanctuary.

"I believe they make amazing companions, but they are different than cats or dogs," said Susie Coston of Watkins Glen, N.Y. For one thing, turkeys get too hot and are too messy to come indoors, said Coston, the national shelter director for the Farm Sanctuary.

Taking the large bird on as a companion requires more responsibilities than owning a dog or a cat, experts say. "If people are adopting domesticated turkeys, they should be aware that it's not a simple endeavor and would take a considerable amount of work," said NTF spokeswoman Kimmon Williams.

"Turkeys as pets is a complicated question," she added.

Like other animals that serve as companions to humans, turkeys come in different breeds, with some weighing as much as 60 pounds, Williams said. Every turkey has its own personality — and some can be aggressive, she said.

Most pet turkey owners agree the birds aren't the kind of pets that can be walked on a leash or dressed for the Christmas family photo.

Coston said, for instance, that she wouldn't sleep with her turkey "like I do my dogs and cats. But I don't love dogs more than I do pigs or dogs and cats more than chickens and turkeys. I have a different relationship with each of them."

"Turkeys are inherently nervous and do not tend to be warm and cuddly. Turkeys also need plenty of space to run around in and be fed the appropriate diet," Williams noted.

Still, Karen Oeh, who will be getting four pet turkeys just before Thanksgiving, said she preferred them over dogs.

"Dogs are needy to me. They need affection, attention, security, they always need you to do something for them. With the turkeys, I don't feel guilty because I didn't take them to the park and throw the Frisbee," said the Ben Lomond, Calif., resident.

Despite their differences, turkeys and traditional pets share traits such as the ability to love unconditionally, loyalty and intelligence, owners said. Dr. Drucilla Roberts, a pathologist from Millis, Mass., pointed out a bonus: "They give us manure and eggs."

"I was always told that turkeys were the dumbest of farm animals. But that's not true. They know us and protect us. If a stranger comes, the turkey is right in his face and clucking and raising its feathers. They make great noises," Roberts said.

Like dogs, some turkeys grow attached to their owners. Oeh recounted how her last turkey, Ariala, followed her around the garden.

"She would stay by my right leg. When I was picking vegetables, she ate out of my hand. She let me pet her and kiss her," Oeh said, adding that petting turkeys can put them into a trance-like state. "She was so immersed in the moment that if you got tired of petting her and moved away, she'd wake up and look around as if to say 'What's going on?'"

The part-time teacher and student services coordinator had to put Ariala to sleep last year due to her health problems, for which Oeh discovered a lack of available information. Through trial and error, she learned that it's hard to give a turkey a pill or take them on trips, because crating them requires giving them bear hugs to keep their wings from flapping.

Experts and owners, however, are aware of at least one problem: owing to their large breasts, commercial turkeys have little balance and can fall easily. One of Roberts' turkeys, Turks, had to be put down after its weight caused a split sternum, she said.

Commercial turkeys are usually the ones that get adopted as pets: Coston said most turkeys rescued by the Farm Sanctuary come from factory farms and have been debeaked, detoed and fattened. Many arrive as victims of neglect, cruelty or hoarding; they fall off farm trucks; or they mysteriously show up in boxes on doorsteps, she said.

The sanctuary, which has locations in California and in New York, places about 50 turkeys a year and has found homes for more than 1,500 birds since it started 26 years ago, Coston said. Hundreds of other birds, including the weakest or those with special needs are not adopted out because the rescues can deal with their problems easier than adopters can, Coston said.

Such sanctuaries are the final stop for the most well-known turkeys to escape the dinner table: the annual National Thanksgiving Turkey (and an understudy), who are pardoned the night before the holiday. After much fanfare and a White House ceremony, this year's turkeys will live on George Washington's Mount Vernon estate in Virginia, with last year's birds, Liberty and Peace.

Karen Dawn, an author from Los Angeles, gets two turkeys from Farm Sanctuary every year and socializes them before they move on. This year's birds are going to live in Malibu.

They arrive stinky, so she gives them a bath and blow dry. "They relax like this is the best day they have had so far," said Dawn, who wrote "Thanking the Monkey: Rethinking the Way We Treat Animals."

Turkeys make great outdoor pets and "make better pets than other birds that you have to keep in a cage indoors," she said.

Dawn said her two 20-pound turkeys will be at her Thanksgiving dinner — but as guests. Rosie and Martha will greet two dozen human guests in the garden and watch the sun set over the Pacific Ocean, while Dawn serves up Wild Turkey bourbon — and tofurkey.