The update on the sale process came as Hostess received approval to give its top executives bonuses totaling up to $1.8 million for meeting certain budget goals during the liquidation. The company says the incentive pay is needed to retain the 19 corporate officers and "high-level managers" for the wind down process, which could take about a year. 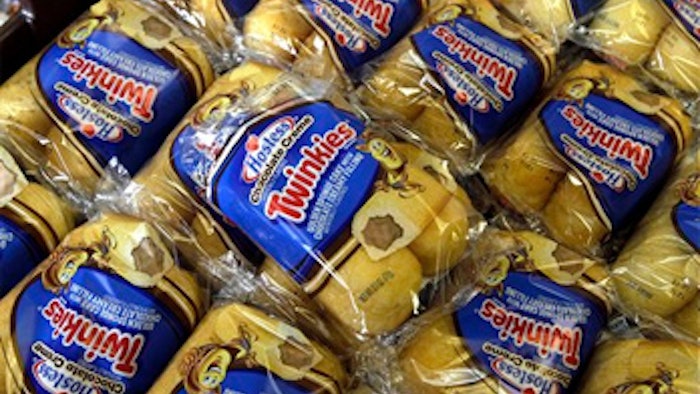 NEW YORK (AP) — The future of Twinkies is virtually assured.

Hostess Brands Inc. got final approval for its wind-down plans in bankruptcy court Thursday, setting the stage for its iconic snack cakes to find a second life with new owners — even as 18,000 jobs will be wiped out.

The company said in court that it's in talks with 110 potential buyers for its brands, which include CupCakes, Ding Dongs and Ho Hos. The suitors include at least five national retailers such as supermarkets, a financial adviser for Hostess said. The process has been "so fast and furious" Hostess wasn't able to make its planned calls to potential buyers, said Joshua Scherer of Perella Weinberg Partners.

"Not only are these buyers serious, but they are expecting to spend substantial sums," he said, noting that six of them had hired investment banks to help in the process.

The update on the sale process came as Hostess also received approval to give its top executives bonuses totaling up to $1.8 million for meeting certain budget goals during the liquidation. The company says the incentive pay is needed to retain the 19 corporate officers and "high-level managers" for the wind down process, which could take about a year.

Two of those executives would be eligible for additional rewards depending on how efficiently they carry out the liquidation. The compensation would be on top of their regular pay.

The bonuses do not include pay for CEO Gregory Rayburn, who was brought on as a restructuring expert earlier this year. Rayburn is being paid $125,000 a month.

Hostess was given interim approval for its wind-down last week, which gave the company the legal protection to immediately fire 15,000 union workers. The company said the terminations were necessary to free up workers to apply for unemployment benefits. About 3,200 employees are being retained to help in winding down operations, including 237 employees at the corporate level.

The bakers union, Hostess' second-largest union, has asked the judge to appoint an independent trustee to oversee the liquidation, saying that the current management "has been woefully unsuccessful in its reorganization attempts."

Hostess had already said last week that it was getting a flood of interest from potential buyers for its brands, which also include Devil Dogs and Wonder bread. The company has stressed it needs to move quickly to capitalize on the outpouring of nostalgia sparked by its liquidation.

"The longer these brands are off the shelves, the less they're going to be valued," Scherer said Thursday in U.S. Bankruptcy Court in the Southern District of New York in White Plains, N.Y.

Last week, Scherer had noted that it was a "once-in-a-lifetime opportunity" for buyers to snap up such well-known products without the debt and labor contracts that would come with the purchasing the entire company. Although Hostess sales have been declining over the years, they still clock in at between $2.3 billion and $2.4 billion a year.

Scherer also said a surprising number of potential buyers have expressed interest in most of its three dozen factories.

The company's demise came after years of management turmoil and turnover, with workers saying the company failed to invest in updating its products. In January, Hostess filed for its second Chapter 11 bankruptcy in less than a decade, citing steep costs associated with its unionized workforce.

Although Hostess was able to reach a new contract agreement with its largest union, the Teamsters, the bakers union rejected the terms and went on strike Nov. 9. Hostess announced its plans to liquidate a week later, saying the strike crippled its ability to maintain normal production.

In court Thursday, an attorney for Hostess noted that the company is no longer able to pay retiree benefits, which come to about $1.1 million a month. Hostess stopped contributing to its union pension plans more than a year ago.

Toward the end of the hearing, a man who said he'd worked for Hostess for 34 years stood to give his objections to the wind-down plan, saying creditors shouldn't be paid when the company hasn't been making its contributions to workers' pension funds.

"I have traveled pretty far to get here," he said, noting that many of his co-workers didn't know how to get to the hearing and speak for themselves. "I just wanted to be heard."