Wining with the Stars

The MacMurray Ranch is now owned by the Gallo wine family and open to the public only during the Sonoma Wine Country Weekend in August, but it's one of several California wineries with celebrity connections, including wineries owned by "Godfather" director Francis Ford Coppola, the late "Davy Crockett" star Fess Parker, and the late "Perry Mason" star Raymond Burr. 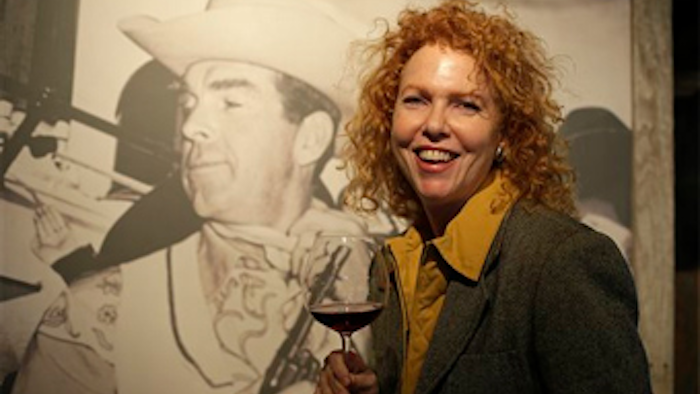 "This was our home," she explains.

What visitors will find at the ranch is a place that's not much different than when the MacMurray family lived there, right down to the rocking chair with the wide flat arms just right for holding the actor's drink as he sat reading the paper in the evening, close enough to the window to keep an eye on the Black Angus cattle he raised.

MacMurray and his wife, actress June Haver, bought the ranch in 1941 from the Porter family, pioneers who established the farmstead in the 1850s — their old wagon still stands in front of the house. The MacMurrays used it for diversified farming during World War II and later raised cattle.

The MacMurray Ranch is now owned by the Gallo wine family and open to the public only during the Sonoma Wine Country Weekend in August, but it's one of several California wineries with celebrity connections, including wineries owned by "Godfather" director Francis Ford Coppola, the late "Davy Crockett" star Fess Parker, and the late "Perry Mason" star Raymond Burr.

MacMurray, star of such classics as "Double Indemnity" and "The Apartment," and later the star of the popular TV series "My Three Sons," spent his free time at the ranch and was deeply involved in the local agricultural scene. Photographs displayed in the property's refurbished barn show the couple with their prize cattle (owners and beast looking very spiffy). There are also a series of historical photographs following the evolution of the ranch from hops and prunes to livestock and now vines.

"If you held a mirror up to our ranch what would reflect back is the whole history of agriculture in Northern California," MacMurray points out. "It's quite remarkable."

When she turned the keys over in August 1996, Kate MacMurray thought "that chapter in our family life was closed," but in 2000 Bob Gallo, son of wine pioneer Julio Gallo, asked her to work with the family as a brand ambassador. MacMurray, a striking figure with a rich laugh and a cascade of copper curls, lives in a small house near the property and travels the world promoting MacMurray Ranch wines.

Although the winery is open to the public only once a year, wine club members get to visit at special events held four times a year. Visitors who go have a chance to see photographs of Fred MacMurray and some of his famous friends, like golfing buddy Bing Crosby, as well as the memorabilia from MacMurray's other hobbies which included skeet shooting, leatherwork and painting.

MacMurray never was nominated for an Oscar or Emmy, but the good-natured actor told his daughter that if she wanted to put an award out, to make it the one he got from an outfit called Popcorn Village USA commending him for making pictures that sold the most popcorn. "He adored popcorn," MacMurray says with a laugh.

Here are more wineries that could leave you with stars in your eyes.

FRANCIS FORD COPPOLA WINERY: Part resort, part winery, this property in Sonoma County has a lot of extras including a swimming pool, cabines (cabanas) equipped with showers for rent, bocce courts and two places to eat including RUSTIC, which has an outdoor patio with a great view of the Alexander Valley. These days, wines from the director of such classics as "The Godfather" are well-established, including the winery's the popular Diamond Collection. His film career is on display here as well with the Movie Gallery featuring lots of memorabilia, including several Academy Awards, Don Corleone's desk from "The Godfather," and the original automobile from "Tucker: The Man and His Dream."

FESS PARKER WINERY & VINEYARD: This winery in California's Central Coast wine growing region has two claims to celebrity fame. It was founded by the late Fess Parker, star of the "Davy Crockett" and "Daniel Boone" TV series and was also featured, under the name Frass Canyon, in the 2004 wine road trip movie "Sideways." (It's where Paul Giamatti's character, Miles, has his meltdown with the spit bucket — funny onscreen, highly inadvisable in real life.) You'll find memorabilia like coonskin caps at the winery gift store, and you can also stay at the Fess Parker Wine Country Inn & Spa, an upscale retreat.

RAYMOND BURR VINEYARDS: The star of TV's "Perry Mason" and "Ironside" also had a passion for wine, which is still celebrated at this small winery in Sonoma County's Dry Creek Valley. There are lots of old photos, "TV Guide" covers and awards in the small tasting room and guests can take their glasses outside to the deck and enjoy sweeping views of the vineyards.