In the first government projection on the harvest's anticipated size, the National Agricultural Statistics Service estimated winter wheat production will be down 10 percent to 1.49 billion bushels, due to fewer acres — 32.7 million acres, some 6 percent fewer acres than a year ago — and a 1.8-bushel decrease in average yields, to 45.4 bushels per acre. 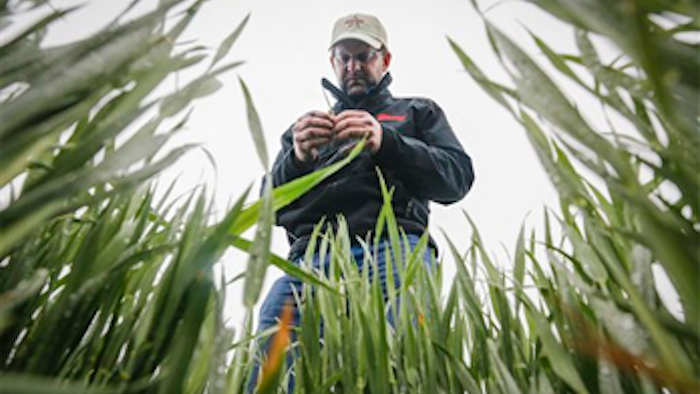 WICHITA, Kan. (AP) — The winter wheat crop is expected to be far smaller this season compared to last, particularly for hard red varieties used in bread, the U.S. Department of Agriculture reported Friday.

In the first government projection on the harvest's anticipated size, the National Agricultural Statistics Service estimated winter wheat production will be down 10 percent to 1.49 billion bushels, due to fewer acres — 32.7 million acres, some 6 percent fewer acres than a year ago — and a 1.8-bushel decrease in average yields, to 45.4 bushels per acre.

The government's forecast comes amid a season marked by drought and late spring freezes in the Midwest's major wheat growing areas, particularly in Kansas — the nation's biggest winter wheat-producing state — and Texas.

"There is concern about the significant production shortfalls from last year to this year and everybody is going to be watching the next 6-8 weeks to see how this crop finishes out," said Justin Gilpin, chief executive officer for industry group Kansas Wheat.

Dean Stoskopf, who is growing 900 wheat acres near Hoisington in west-central Kansas, expects to have an average or below-normal crop because of all the dry weather.

"We were fortunate enough to get some rains here, where not everybody did, but it is still a wait and see what we are going to end up with," Stoskopf said in a phone interview. His wheat greened up, but Stoskopf is mindful that there is no subsoil moisture to carry the crop to harvest if the weather turns hot and the rains stop.

The wheat heads — where the kernels develop — have just emerged, meaning it will likely be July before Stoskopf can harvest if all goes well.

"We have a ways to go before we have a wheat crop," he said.

One bushel of wheat yields about 42 pounds of flour — enough to make 73 loaves of bread.

"What the millers and bakers and exporters are going to be looking at real closely now is the spring wheat crop and what is going to happen," Gilpin said. "Spring wheat is traditionally stronger, higher protein and also used for bread — and so the blends that you see are usually between hard red winter and hard red spring wheat."

The hard red spring wheat crop, currently being planted, will be closely monitored to see if it'll be able to make up for the hard red winter wheat shortages, he said. Wheat buyers are also expected to purchase wheat that had been left over from last season's crop.

The crop outlook for drought-weary Texas is so poor that the state is forecast to harvest just 54 million bushels of wheat, compared to the 96 million bushels produced amid last year's drought. In 2010, Texas was the nation's second-largest producer behind Kansas.

Kansas, which mostly raises hard red winter wheat, is forecast to harvest 299.7 million bushels, down 22 percent from last year's 382.2 million bushels. It's also below the forecast of 313 million bushels estimated by participants in the Kansas wheat quality tour earlier this month.

Far western Kansas is considered a disaster area, and farmers told tour participants earlier this month that crop insurance agents have already begun writing off acres there. Wheat tour participants examined 570 fields, finding that in south-central Kansas, which got late winter snowstorms and heavy spring rains, the wheat looks good and production there is expected to offset some losses elsewhere in the state.