Brewers Team Up on Beer to Help Military Families

Craft breweries from around the country are toasting the troops with a beer aged with a unique ingredient that symbolizes America's pastime — baseball bats. Nine different brewers collaborated to create Homefront IPA, all using the same recipe, complete with orange peel and unfinished maple Louisville Sluggers. 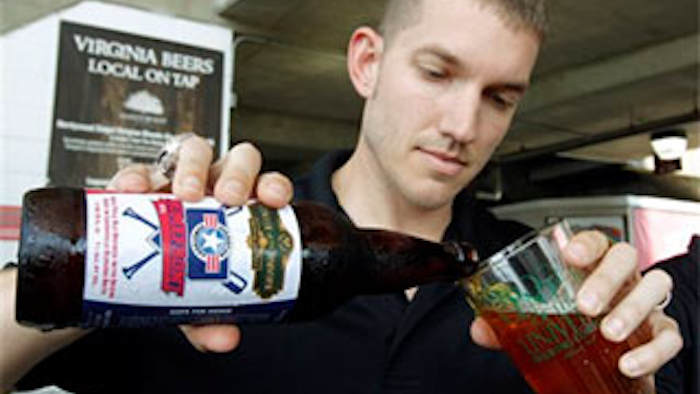 RICHMOND, Va. (AP) — Craft breweries from around the country are toasting the troops with a beer aged with a unique ingredient that symbolizes America's pastime — baseball bats.

Nine different brewers collaborated to create Homefront IPA, all using the same recipe, complete with orange peel and unfinished maple Louisville Sluggers. Toward the end of the fermentation process the beer soaks in a tank with the maple bats.

All proceeds from the beer, which is being released for Memorial Day, will be donated to Operation Homefront, a national group that provides emergency financial assistance to military families.

The Hops for Heroes project began in 2011 when Chris Ray, co-founder of Center of the Universe Brewing Co. in suburban Richmond, was pitching for the Seattle Mariners.

A home brewer at the time, Ray wanted to partner with a local brewery to create a charity beer. Together with Fremont Brewing Co. in Seattle and his brother, Phil, they developed the recipe and chose the charity Operation Homefront, which was suggested by Ray's childhood friend that served as a soldier in Afghanistan.

"I was always taught when I was growing up to help out the people that help you," Ray said while talking about the beer at The Diamond, home of the Flying Squirrels minor league baseball team. "They're putting their lives on the line for us every day. The least we can do is help them keep their car on the road or help them keep their house."

The list of participating breweries has grown to include Cigar City Brewing in Tampa, Fla., Sly Fox Brewing Co. in Pottstown, Pa., Perennial Artisan Ales in St. Louis, 21st Amendment Brewery in San Francisco, the Phoenix Ale Brewery in Phoenix, Left Hand Brewing Co. in Longmont, Colo., and Stone Brewing Co., in Escondido, Calif. Other sponsors within the craft brewing industry provided ingredients and supplies to help brewers keep their costs down and increase the amount of money raised for the cause.

Last year, the project helped raise $165,000, with additional donations to the group coming in because of the beer project, Ray said. After the beer is brewed, the bats also are dried and auctioned off.

The breweries will sell the beer in bottles and kegs in their areas, with all proceeds being donated to local chapters of the charity. Bottles in the Richmond market even include American flag caps.

"It doesn't really get any more Americana than beer, baseball and America's troops," Ray said.

While Ray is glad more breweries are participating in the project, he said he wants it to grow slowly to keep the beer novel.

Aaron Taylor, spokesman for Operation Homefront, said the project is a great opportunity for folks to support military families and have a good time.

"It's a win-win for everybody," said Taylor, whose group helped meet the needs of 151,150 military families in 2012 by paying for car and home repairs and other financial aid.

Craft brewers are known for using their beers to support causes that they believe in, said Julia Herz, the craft beer program director at the Brewers Association, a Colorado-based industry group.

"They're just so tied to their communities," she said. "It's a very symbiotic thing,"

And with beer lovers excited to see a craft beer that benefits a charity, the beers usually sell out fast.

Several wineries a have created wines to support military groups like Operation Homefront.

Bourbon bottler Jim Beam has partnered with Operation Homefront for the past five years to raise money and awareness through promotional events such as concerts. And whiskey company Wild Turkey has teamed up with The Boot Campaign, which supports veterans through the sale and promotion of combat boots. Its "Boots and Bourbon" initiative raises money and highlights returning veterans' issues.

Michael Felberbaum can be reached at http://twitter.com/MLFelberbaum.