Even as fast-food chains tout their healthy offerings, they're also coming up with fatty new treats to keep customers interested. Case in point: Dunkin' Donuts is adding a doughnut breakfast sandwich to its national menu this week. The sandwich, which comes with fried eggs and bacon between a split glazed doughnut, will become a part of the permanent menu starting Friday, which the chain claims is "National Donut Day." 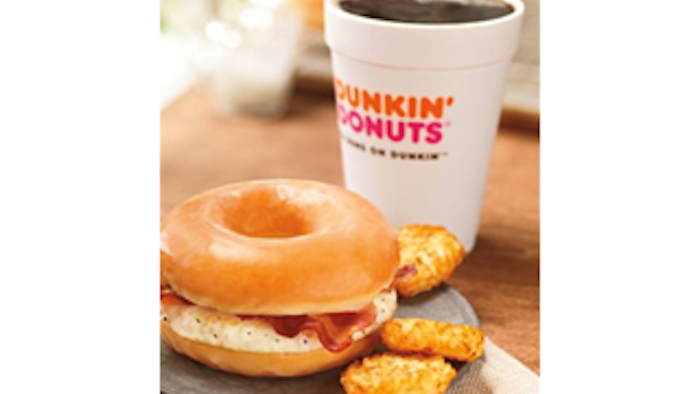 NEW YORK (AP) — Even as fast-food chains tout their healthy offerings, they're also coming up with fatty new treats to keep customers interested. Case in point: Dunkin' Donuts is adding a doughnut breakfast sandwich to its national menu this week.

The sandwich, which comes with fried eggs and bacon between a split glazed doughnut, will become a part of the permanent menu starting Friday, which the chain claims is "National Donut Day." Dunkin' Donuts had tested the sandwich in select stores in eastern Massachusetts in April, creating considerable buzz online.

Notably, Dunkin' Donuts says the "Glazed Donut Breakfast Sandwich" clocks in at 360 calories, which is less than the 390 calories for the turkey sausage sandwich it recently introduced for people looking to eat better.

Dunkin' Donuts, based in Canton, Mass., is a unit of Dunkin' Brands Group Inc., which also owns Baskin-Robbins.2

The latest concoction may seem to conflict with the push by companies to court customers with better-for-you offerings. For example, options like egg whites and whole grain bread have become common as fast-food chains scramble to attract people in their 20s and 30s, who they say want fresher, wholesome food.

That desire to give menus a healthier glow isn't just lip service. Earlier this year, a report by the Hudson Institute found that lower-calorie options were a key indicator of growth at restaurant chains between 2006 and 2011.

The chains that expanded such options saw customer traffic rise by 11 percent, while those that didn't saw traffic fall by 15 percent, according to the public policy research group.

But at the same time, companies know that indulgent new creations can generate excitement and a big sales spike. For example, Taco Bell says its Doritos Locos Tacos were its most successful item ever, helping lift sales at established restaurants by 8 percent last year.

Stan Frankenthaler, executive chef and vice president of product innovation at Dunkin' Donuts, noted that the chain has been growing sales of its breakfast sandwiches in recent years. The profit margins on breakfast sandwiches are second only to beverages, according to a recent company presentation for investors.

As for Dunkin's recent offerings of a breakfast sandwich with turkey sausage and the new doughnut sandwich, Frankenthaler said they reflect the chain's goal of offering as much variety as possible.

Already, he noted that people can customize sandwiches in multiple ways, such as requesting that it be made with a certain type of bagel.

When asked whether a customer will also be able to order a sandwich on any type of doughnut, such as a chocolate cake doughnut, Frankenthaler said, "I'm sure the store will do that for you."