The Greek yogurt boom in New York is being harnessed to make electricity. More Greek yogurt production has meant more whey, a watery byproduct from the process. Yogurt makers commonly ship it back to farms for use as feed and fertilizer, but it's also is being used to generate power in several places. 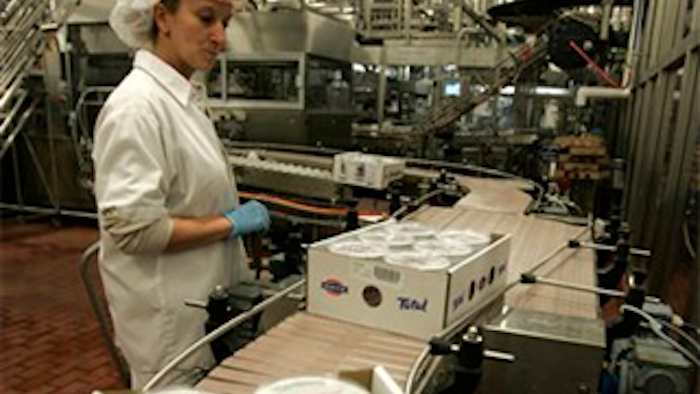 ALBANY, N.Y. (AP) — The Greek yogurt boom in New York is being harnessed to make electricity.

More Greek yogurt production has meant more whey, a watery byproduct from the process. Yogurt makers commonly ship it back to farms for use as feed and fertilizer, but it's also is being used to generate power in several places.

At the Gloversville-Johnstown wastewater plant west of Albany, it's pipelined from the nearby Fage yogurt plant, where it goes into a 1.5 million-gallon tank filled with anaerobic bacteria, called an anaerobic digester. The resulting methane gas becomes combustible fuel that generates nearly enough electricity to power the plant.

"If the generators are off, we have a $500,000-a-year electric bill. So 90 percent of that is kind of offset by this kind of generation," said consultant George Bevington. He said about 500,000 gallons of whey come into the plant weekly, about two-thirds of the organic waste that goes into the digester.

It takes four gallons of milk to make one gallon of Greek yogurt, so more Greek yogurt means more acid whey (as opposed to the less acidic sweet whey associated with hard cheese making). Though not toxic, producers have to do something with it.

"It's a profit problem for the plant. They're buying four gallons of milk and making one gallon of yogurt. And they've got three gallons of this stuff. It's mostly water but they got a bunch of volume of stuff," said Andrew Novakovic, a professor of agricultural economics at Cornell University.

Up to 80 percent of the whey from Fage's U.S. plant is piped directly to the wastewater treatment plant. The rest goes to farmers with anaerobic digesters for energy or feed, company spokesman Russell Evans said.

"It certainly is a cost-effective way of using whey," he said. The plant is in the midst of nearly doubling its capacity and is working to keep a high percentage of whey in digesters.

Chobani spokeswoman Lindsay Kos said most of the whey from its central New York plant is shipped back to farms for feed. Roughly a third of Chobani whey is used as fertilizer and a small percentage is used to produce energy, she said.

Though not an especially valuable cattle feed, it can be blended with other feeds to replace protein and energy nutrient requirements that otherwise would be met with more expensive feeds, Novakovic said.

Finger Lakes dairy farmer Neil Rejman, who keeps 3,300 cows, regularly accepts whey from Chobani. Though whey usually makes up less than 5 percent of what goes in his digester, it helps Rejman keep running his digester at maximum 1,000-kilowatt-hour capacity.

"Everyone's talking about whey and yogurt as if it's a new problem or a phenomenon. It's an old story," he said. "It's really not a problem for the industry. It might be a little bit of a cost for yogurt manufacturers. But the processors, they're getting a home for it on the farms, so that's a good thing. For farmers, it's a good thing because they're using it for feed, electricity and fertilizer. And the consumers are getting renewable power."

But it can be a costly solution out of reach of smaller or struggling farms. Rejman said his farm's digester cost about $4.5 million to set up, with a $1 million grant from New York Energy Research and Development Authority.

Gov. Andrew Cuomo said this year that NYSERDA would double the maximum incentive to up to $2 million per installation, part of the administration's commitment to helping the yogurt industry in New York, said authority spokeswoman Kate Muller.

There are at least a couple of municipal wastewater treatment plants that take in whey. Aside from the Johnstown-Gloversville, the plant in Ithaca takes in a smaller amount of whey from Fage. Bevington expects more treatment plants to take it in as the word spreads.

"It's gaining momentum," he said.