Kuma's Corner Restaurant in Chicago names its hamburgers after heavy metal bands. For October, the restaurant chose to name the burger after the Swedish band Ghost. Members of the band dress in religious robes and wear skeleton face makeup. 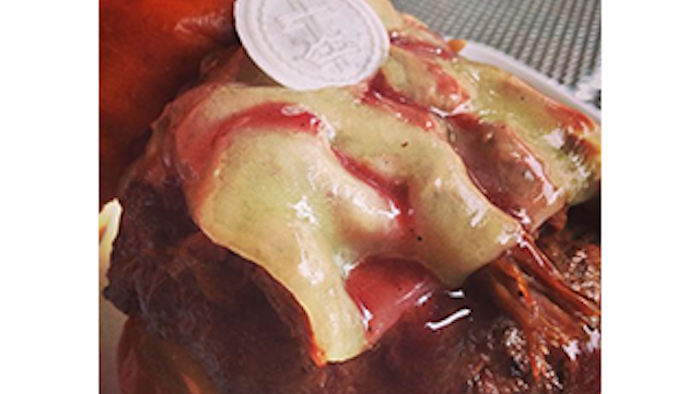 CHICAGO (AP) — A Chicago restaurant has cooked up a controversial burger of the month for October, garnishing it with an unconsecrated communion wafer and a red wine reduction sauce.

Kuma's Corner, a foodie destination with just a few tables, names its hamburgers after heavy metal bands. For October, the restaurant chose to name the burger after the Swedish band Ghost. Members of the band dress in religious robes and wear skeleton face makeup.

It's in poor taste, said Jeff Young of New Orleans who runs the blog Catholic Foodie.

"It's not, for us, the Eucharist," Young said. "However this wafer is a symbol. There's a cross on it. It's like taking a flag and burning a flag."

Luke Tobias, Kuma's Corner director of operations, said the restaurant never wanted to offend anyone. He said reaction has been a "mixed bag," but more positive than negative.

"There are people who are offended by it, but we're delighted to see that generally people seem to have a sense of humor," Tobias said.

The restaurant, which often plays loud heavy metal music, is a fan of Ghost, Tobias said. Young said he realizes that and knows Kuma's Corner didn't intentionally want to make anyone mad.

"The Ghost" burger is selling well, Tobias said, because customers are curious about it.

"Hopefully people will have a good time with it — that's certainly what we're trying to do," Tobias said.