Although a weekend storm provided some of the highest rainfall amounts to the Los Angeles area in years, forecasters noted that such systems would have to take place frequently for California to begin to pull out of a crippling drought. 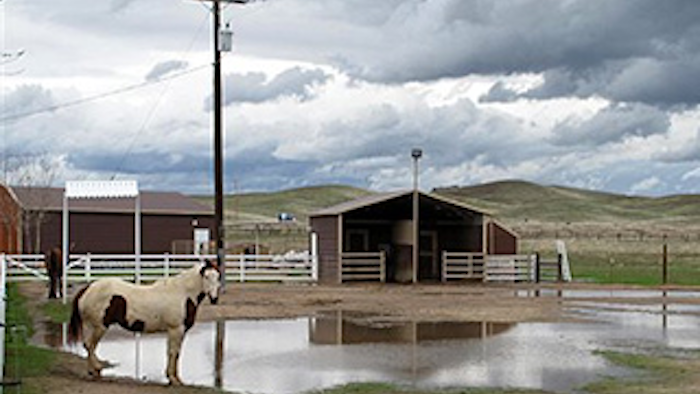 AZUSA, Calif. (AP) — A storm that brought some of the highest rainfall totals to the Los Angeles area in years, including eight inches on some mountains, was just the beginning of what the region needs to pull out of a major drought.

Although the storm was expected to remain strong Saturday, forecasters said such systems would have to become common for the state to make serious inroads against the drought.

"We need several large storms and we just don't see that on the horizon," National Weather Service meteorologist Eric Boldt said Friday. "This is a rogue storm. We will dry out next week."

Forecasters expected the storm to last through Saturday in California before trundling east into similarly rain-starved neighboring states. Phoenix was expecting its first noticeable precipitation in two months. The storm was projected to head east across the Rockies before petering out in the Northeast in several days.

Southern California has so far been spared major damage from the powerful Pacific storm, but forecasters warn that intense rain will occur even as it begins to move east.

A burst of heavy showers before dawn Saturday impacted wildfire-scarred mountainsides above foothill suburbs east of Los Angeles, causing another round of mud and debris flows in the city of Glendora.

The National Weather Service says the center of the system located off the coast will move across Southern California to exit the region, but bands of intense rain will still occur.

The system has been so volatile that the weather service issued a 3:30 a.m. tornado warning for east-central Los Angeles County when radar showed the rotation signature of a tornado and severe thunderstorms.

In Azusa and neighboring foothill communities about 25 miles east of Los Angeles that sit beneath nearly 2,000 acres of steep mountain slopes that just weeks ago were menaced by a wildfire, about 1,200 homes were under evacuation orders Friday over mudflow fears but were so-far spared.

In particular danger were about a dozen homes in Azusa that were backed up against a steep fire-denuded hillside several hundred feet high that authorities feared could collapse.

Muddy water swept down the hillside earlier in the day, spreading about two feet of ooze above one backyard, although fencing walls and an orchard of about 5,000 avocado trees behind the development stopped most serious debris.

Despite the urging of police and fire officials who cleared reporters and others out of the neighborhood as the hill grew more saturated, at least a few residents decided to stay on.

Dennis Sanderson, 50, said his reaction to the evacuation order was "we'll ride it out," but by nightfall he was undecided and keeping an eye on the weather because of forecasts for more rainfall.

About 13 homes were evacuated Friday night in Palmdale in northern Los Angeles County, where a mudslide closed a major road.

Thunder echoed and hard rain fell late Friday night on Hollywood, which was abuzz with preparations for Sunday evening's Academy Awards and hopes the rain will have moved on by then as expected.

Rainfall totals in parts of California were impressive, especially in areas that typically don't receive much, but not nearly enough to offer long-term relief from a long-running drought.

Three inches fell on Bel Air and Pasadena, and an urban flash-flood warning that was sent to cell phones was called late Friday night for central Los Angeles County.

For the first time in nearly three years, downtown Los Angeles received more than 2 inches — doubling its total for the rainy season that began in July, the National Weather Service said. Yet the city remained 7 inches below the normal 11 inches.

Meanwhile to the east in San Bernardino County, a levee failed and put eight houses in danger of serious flooding, but county fire crews were working to protect them and no evacuations were ordered.

Forecasters expected the storm to last through Saturday in California before trundling east into similarly rain-starved neighboring states. Phoenix was expecting its first noticeable precipitation in two months. The storm was projected to head east across the Rockies before petering out in the Northeast in several days.

Winter storm warnings were in effect in the Sierra Nevada. About 15 inches of new snow had fallen by mid-day Friday at the University of California, Berkeley's Central Sierra Snow Lab located at 6,900 feet elevation.

A tornado warning was issued for Sacramento, Yolo and Sutter counties Friday night but was canceled soon after.

Farmer Ray Gene Veldhuis, who grows almonds, walnuts and pistachios and runs a 2,300-cow dairy in the Central Valley's Merced County, welcomed the wet weather but knew it would not rescue California from drought.

"Hopefully, they keep coming," Veldhuis said of the storms. "If not, we'll deal with the hand we're dealt."

Numerous traffic accidents occurred on slick or flooded roads across California, including one about 60 miles east of Los Angeles involving a big rig whose driver died after falling from a freeway overpass.

The storm was good news for other Californians who didn't have to worry about mudslides.

Kite-surfer Chris Strong braved pelting rain to take advantage of strong winds that gave him about an hour of fun over the pounding surf in Huntington Beach.

"I don't get to kite here in these conditions very often — only a handful of times — but you put them in the memory bank," he said.