One of Rhode Island's signature dishes is "hot wieners." This state classic consists of veal, pork or beef wieners slathered with mustard, covered in a special meat sauce, topped with chopped onions and celery salt, and served in a steamed bun. 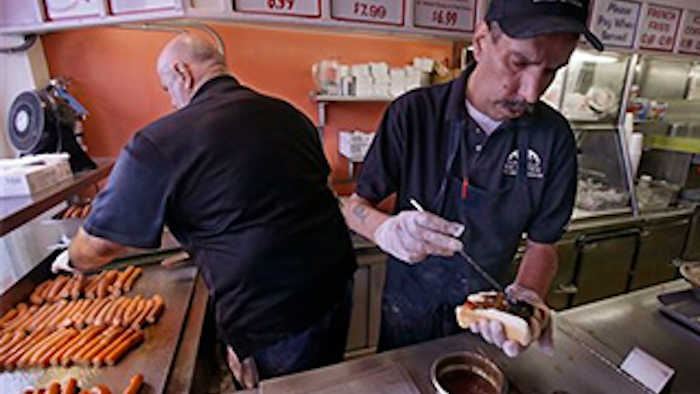 Those are the cardinal rules at Olneyville New York System, arguably the best-known Rhode Island spot for one of the state's signature dishes: hot wieners.

"Dish" is probably an overstatement. These are veal, pork and beef wieners slathered with mustard, covered in special meat sauce, topped with chopped onions and celery salt, and served in a steamed bun. Ordering one with all the fixings is called "all the way." Many say all the way is the only way.

"They're so greasy but good," said Paula Malone of Glocester, who came in one recent lunch hour with a colleague from the Providence VA Medical Center to pick up a big order. As in 33 hot wieners, seven coffee milks — coffee syrup-sweetened milk, another Rhode Island staple — and 10 orders of fries, for a Mardi Gras office party.

Hot wieners got some national recognition last month, when Olneyville New York System was named an "America's Classic" by the James Beard Foundation.

The $2.15 wieners are small so lots of customers order a few at a time. The grillers prepare them in a way that's known as "up the arm" — balancing a row of buns and wieners on their forearms, then adding each ingredient in quick, choreographed succession.

The Food Network's Guy Fieri raved about Olneyville's hot wieners in a segment of "The Best Thing I Ever Ate." ''Come for the hot wieners and stay for the show," he said. "Can't beat it."

Last year, Providence Mayor Angel Taveras appeared on the cover of The Providence Phoenix's "The Best" issue behind the restaurant's counter, grinning with a hot wiener in hand.

Rhode Islanders love their weenies. As co-owner Greg Stevens says, the place has no demographic. It's just as likely you'll see a state politician at the counter as you will a police officer, a student or a foodie. A guy driving a Bentley once asked him for a New York System bumper sticker.

According to Stevens, who with his sister Stephanie took over the restaurant two years ago when their father died, the state's first hot wiener restaurant — Original New York System — opened in Providence in the late 1920s.

His family, then with the surname Stavrianakos, came to Rhode Island in the 1930s in a wave of Greek immigrants from New York, one of the hot dog capitals of the world. Olneyville New York System opened in 1946 around the corner from its current location. There are plenty of places to get wieners in the state, like Sam's New York System in North Providence, Wein-O-Rama in Cranston and Moonlight House of Weiners in Woonsocket.

Not much has changed at the Olneyville spot, and that's by design. The booths are throwback yellow and orange, and the tables are 1950s Formica. Jimmy Saccoccio, now the general manager, has been working there since 1968. The hot wieners are pretty much the same, too.

During a recent lunch hour, a couple from Boston sitting in a middle booth are easily identified by the counter staff as "weenie virgins." It's not uncommon to get a playful, or embarrassing, shout-out: "Virgin in the house!" Stevens says he can spot someone who's never had one as soon as he or she walks in the door.

Call the wieners hot dogs and you'll be corrected immediately. And ketchup is strongly discouraged. There's a sign on the wall that says, "It Has Been Said That When You Put Ketchup on A Hot Wiener, It Is a Sin ... Here It Is Against the Law!'

Bumble Taylor, 38, of Providence, has been coming to Olneyville New York System since 1981. When he was a kid, he used to panhandle in the old grocery store parking lot to make a few bucks, which he'd use to buy hot wieners.

"Everybody comes in — they got to have a weenie," Taylor said.