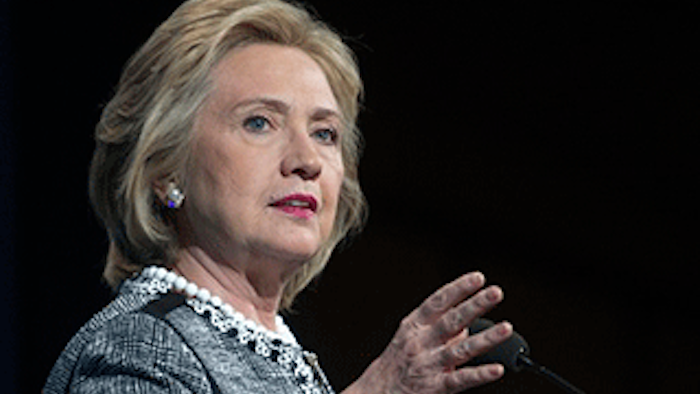 The former secretary of state was launching a project called "Job One" at the Clinton Global Initiative America meeting Tuesday, featuring hiring, training and mentoring initiatives from 10 companies, including The Gap, JPMorgan Chase, Microsoft and Marriott.

Clinton planned to address economic growth and youth employment during the meeting and was unveiling partnerships aimed at helping people age 16-24 who are out of school and unemployed. Students preparing for the workforce in the aftermath of the recession have faced persistently high unemployment levels at rates about twice the national average.

"Many Americans are still feeling that they have not recovered from the Great Recession. They are still worried about their future, the future of their children," Clinton said in an interview last week with Fox News, pointing to culprits like student debt, stagnant wages and income inequality. "They look and they say, 'What happened to the American dream?'"

Clinton is in the middle of a book tour for her new memoir, "Hard Choices," about her four years at the State Department under President Barack Obama, but interviews surrounding it have brought attention to her own economic circumstances.

The former first lady told ABC News earlier this month that she and former President Bill Clinton were "dead broke" when they left the White House in early 2001. Republicans noted the former president had earned more than $100 million from 2001 to 2007 through book deals, paid speeches and other work, and Mrs. Clinton can command $200,000 for a speech.

In an interview with The Guardian published Sunday, Clinton said the public doesn't see her as part of the problem of the nation's gap between the wealthy and poor, "because we pay ordinary income tax, unlike a lot of people who are truly well off, not to name names; and we've done it through dint of hard work." Republicans pounced on the remarks, asserting Clinton was downplaying her wealth and did not understand the struggles of ordinary Americans.

Clinton often notes that she worked her way through college and law school and her interest in youth employment goes back decades. In the 1980s, she was part of a commission established by the W.T. Grant Foundation that studied the economic struggles of young people who did not attend or complete college.

As she considers her political future, the way Clinton frames economic policies will be closely watched by Democratic activists who have sought ways to raise the minimum wage and address income inequality. The initiatives being announced Tuesday also allow Clinton to speak to the economic plight of young people, who backed Obama in large numbers during the 2008 Democratic primaries.

Under the Job One initiative, 10 companies will commit to expanding training, hiring or mentoring for young people within their companies and will urge others to do the same. Other participants include Corning, Ernst & Young, Lifeway Foods, MDC Partners, Salesforce.com and Symantec.

The project will also recruit 100 small businesses to find ways to hire young people and create a new employment network through the Clinton Global Initiative to spur more job opportunities.

In all, the commitments are expected to reach about 150,000 young people, Clinton officials estimated.

JPMorgan Chase, for example, plans to create 4,000 summer jobs and will help another 20,000 young people prepare for the job market. Courtyard by Marriott is partnering with the National Academy Foundation, which helps prepare young people for college and careers, to provide job shadowing and career mentoring to more than 10,000 young people and their teachers over three years.

Gap will train 90,000 young people through partnerships with nonprofit organizations and local Gap retail stores while expanding its internship program.

"What we're really hoping to do is create a movement of employers who will recognize this is a pool of talent that we haven't thought about before," said Gail Gershon, Gap Inc.'s executive director for community leadership.