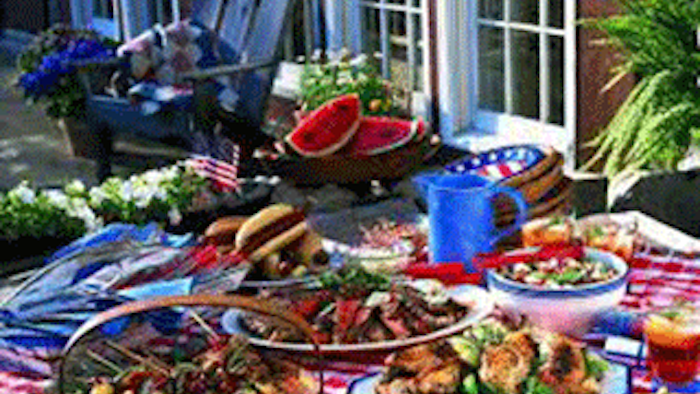 (Newswise) — What's the Fourth of July without food? It could be downright un-American, according to a Kansas State University culinary historian.

Marshall is a food journalist who teaches food writing in the hospitality management and dietetics department at the university's College of Human Ecology. She also is the author of the 2014 Kansas Notable Book selection, "Teatime to Tailgates: 150 Years at the K-State Table."

Food was a staple at one the country's first Fourth of July celebrations, Marshall said, but the menu enjoyed by John Adams, a founding father of the country and second president of the U.S., was very different from what is served at the barbecues and picnics common today.

"Adams and his wife, Abigail, on July 4, 1776, ate turtle soup, New England poached salmon with egg sauce, green peas, boiled new potatoes in the jacket and Indian pudding, which would have been made with corn meal, or apple pan dowdy, which is like an apple cobbler," Marshall said. "Fourth of July foods have changed with the times."

Many of the foods common at today's Fourth of July celebrations came from Europe or other places, but have been "Americanized," Marshall said. This is especially true with hamburgers and hotdogs.

"Neither hamburgers nor hotdogs are authentically American, but America has taken them over," she said. "Hotdogs came from sausages, which came from Europe. When they came over here, they got changed a lot."

"Mustard was German, but we re-did it here, Americanized it," Marshall said. "Ketchup, in the colonial days, was made with a variety of things; it didn't mean today's tomato-based product. The colonials made ketchup with all kinds of things, including cucumbers and fruits, but today it's tomato ketchup. Worcestershire sauce and hot pepper sauce are all-American, too."

Other Fourth of July food favorites trace their origins to other countries, too.

What's the Fourth without potato salad or potato chips? Marshall said potatoes were domesticated in Peru, went to Europe and then came the U.S. Since they were easy to grow, they have long been a staple in Americans' diets. When the food processing industry became big, the potato chip was born.

Thomas Jefferson introduced ice cream to America. He brought it back from France, where he served as U.S. ambassador. "Jefferson loved French food and brought a lot of it back to America," Marshall said.

Even watermelon, another cool treat Americans enjoy on a hot summer day like the Fourth of July, was brought to the U.S.

"Watermelons originated in Africa and came over here with the Spanish explorers. Indians in the Southwest grew watermelon, so the fruit has an older American heritage," Marshall said. "Watermelon is extremely popular. Americans grow something like 3.5 billion pounds of it each year."

Just as our Fourth of July foods have evolved, so have the celebrations of the nation's birth. Community picnics, big outdoor barbecues, parades, political speeches and even oratory contests were popular ways to celebrate the day until more modern times.

"The first Independence Days were to celebrate our nation's independence. In 1804, Lewis and Clark reportedly had the first Fourth of July celebration west of the Mississippi. Even wagon trains heading west were known to stop for the day to celebrate, sometimes baking cakes while on the trail," Marshall said. "Now it seems people use the day to show off their patriotism. The day is more about fireworks and food."

One trend Marshall is noticing with today's Fourth of July foods is that they are often red, white and blue — think sheet cakes decorated with whipped cream, strawberries and blueberries to look like the American flag, or red-, white- and blue-layered gelatin.

"People enjoy having fun with it," she said.

"Our appreciation of ethnic food diversity is growing," Marshall said. "America is changing from how it was even 50 years ago, so it's no surprise our Fourth of July celebrations are reflecting our diverse ethnicity."