After fleeing from their crime-ridden homeland, two brothers brought their dreams to reality when they opened their U.S. cheese-making business in October 2013. Central American Foods LLC is working to produce 50,000 pounds of cheese a month. 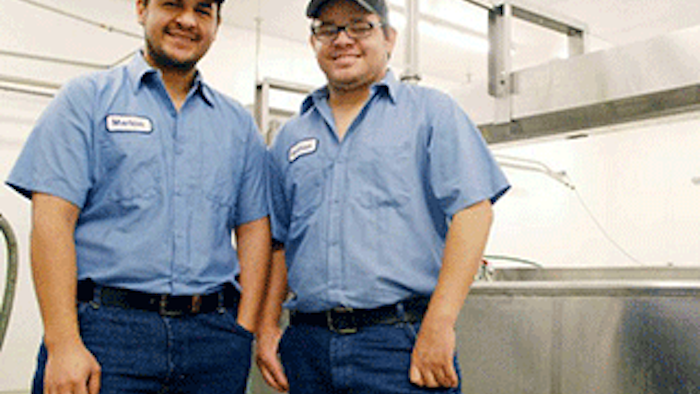 COLUMBUS, Neb. (AP) — Marlon Reyes and his older brother Carlos left their home country of Honduras a little more than four years ago in search of the American dream.

They fled their crime-torn homeland with a business plan, their family's cheese recipes and little else.

But the brothers, ages 30 and 33, were determined to establish new lives in a country free of the problems that currently plague their home nation.

"Things are pretty bad in Honduras," Reyes said while discussing the brothers' decision to move to the U.S. in April 2010 to get away from the robberies, kidnappings and other crimes that are part of everyday life back home.

The Reyes family has been in the cheese-making business for years and they knew the growing Latino population in the U.S. would serve as a strong customer base if they could establish themselves here.

"We already knew the market was here. We didn't know it was so big," said Reyes, who owns Central American Foods LLC with his brother.

The cheese factory, which operates out of a leased space at 1014 E. 19th St., started production in October 2013, nearly two years after the business was started on paper.

The brothers originally targeted Schuyler for their operations, but a failed attempt to locate there forced them to set their sights west.

In Columbus, Reyes said they immediately received the assistance and guidance needed to get their plan off the ground.

The brothers worked with a local real estate company and the U.S. Department of Agriculture to select the site for their factory, a former warehouse in a tan, metal building still shared with Frontier Communications on the city's east edge.

They also hooked up with Columbus Economic Council and its Co-Chairman David Bell, who led them to the University of Nebraska-Lincoln Food Processing Center where the family's cheese recipes were revised to work with pasteurized milk instead of the raw product found in Honduras.

Reyes also enrolled in the entrepreneurship program at Central Community College-Columbus to learn more about business management before opening the factory that now employs about 10 people.

Boosted by a nearly $100,000 loan from the city and financial backing from a local bank, the brothers completely remodeled their portion of the building — bringing in specialized equipment from across the country — before beginning production nine months ago.

"The place is unrecognizable from what we got to what we have now," Reyes said of the 5,000-square-foot space, which now includes processing and drying rooms, a walk-in cooler used as a cutting room, an in-house testing lab and a stainless-steel system that moves milk from two large storage tanks. Refrigerated trailers are used to store the product before it's shipped to distributors.

"The whole processing room was built from scratch," he said of the more than $100,000 investment.

Central American Foods received its USDA permits in October 2013 and is now Grade A certified, something Reyes is particularly proud of.

The rating also allows Central American Foods to make any dairy product with oversight from the Food and Drug Administration.

Although business here was slow in the beginning, there is one major advantage of having a U.S. location.

Reyes said it was difficult to export cheese from Honduras to the U.S. because of strict rules enforced by U.S. Customs and Border Protection agents on the lookout for drugs. The product can spoil while sitting in quarantine, making it harder to maintain a customer base without a guaranteed supply.

That's not the case at the Columbus plant, which Reyes says also makes a better, lower-cost product than what can be imported.

Central American Foods, which receives its milk from Prairieland Dairy and Dairy Farmers of America, secured its first major contract around March with Miami-based Global Garlic, a nationwide distributor of Hispanic foods.

The local factory makes about 80,000 pounds of product per month for Global Garlic and expects to start a new contract Aug. 1 with a New York company that wants 120,000 pounds of Central American-style sour cream each month.

Reyes is also working with a Nebraska company, Productos Campesino de Nebraska Inc., on a deal to produce 40,000 to 50,000 pounds of Mexican cheeses monthly, and he expects more contracts to be finalized by the end of 2014.

"The word is going around that there's a guy in Nebraska that is making Central American cheese," he said.

And Reyes is always working on creating new products to offer.

"Every day that we're in production in the processing room, I'm in the lab making new samples, trying new things," he said.

Although it's hard work already — Reyes often arrives at the factory around 3 a.m. and doesn't leave until the evening hours — he's already got his eyes on a future expansion.

Reyes said they have an offer in to buy the building and would like to add more space in the next year or so.

"We are already crowded," he said while describing a plan that could also include a partnership with an area dairy operation.

Eventually, the brothers want to bring their mother to the U.S. to join the family business here.

"Columbus, we consider this our home," said Reyes. "We're not leaving."